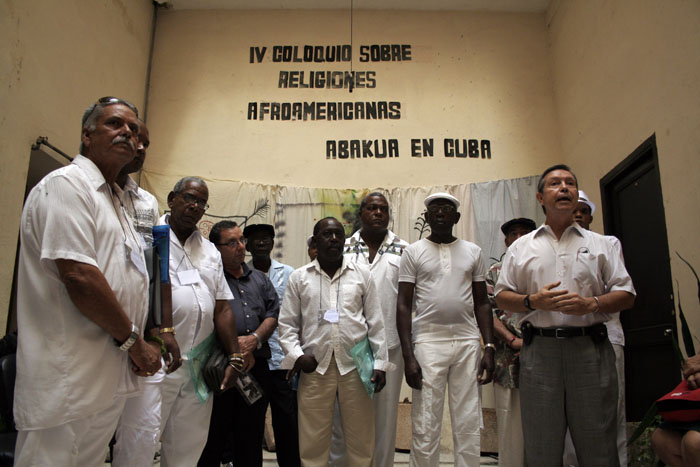 Cuban television has several talk shows, with these ranging in quality. One of them is “Dialogo Abierto” (Open Dialogue), which this week dealt with the evocative theme of “Abakua Ethics.”

The Abakua is a male society that has existed since the early nineteenth century in only a few cities in western Cuba (Havana, Matanzas and Cardenas, mainly). It is based on a secret liturgy of African (or Carabali) roots, which is inspired from the practices of similar societies around the Cross River region, currently in territories of Nigeria and Cameroon.

It’s interesting that Cuban TV has begun to address this controversial topic since usually the Abakua receive such “bad press”; they’re presented as sexist, violent almost Mafiosi types and criminals.

Are these stereotypes true? Today the Abakua is “fashionable” among young people, many of whom believe that joining the association makes them a tough guy on the street. For them, to be known as an Abakua is a certificate of manhood.

The guests on the TV program were the renowned experts Tato Quiñones, Natalia Bolivar and Ramon Torres, who have each researched the subject in depth.

They talked about the African roots of Abakua, discrimination that has been faced by this fraternity since the colonial period and its contribution to Cuban culture. Tato Quiñones even showed an Abakua registration form, which stated the positive ethical values each member must possess.

It was logical that the debate revolved around the concept of manhood held by the Abakua, who exclude women and gays in their association and also tend to be models of the “tough guy,” though endowed with courage and honesty. This is a controversial point of Abakua ethics that was able to be discussed.

Another controversial point was the relation between Abakua and the justice system, or better said, its relationship with the Abakua society.

The debate will culminate — I suppose — discussing the current popularity of the association among young Cubans.

What they could also discuss is the contribution of militant Abakua members to popular Cuban struggles. In no way has this been examined in depth since their wasn’t enough time to deal with the issue.

Explored in a medium like TV, issues of African cultural formations are still difficult because their study is generally not included in schools. Therefore, many people have no discernible knowledge with which they can distinguish one African ancestral cultural manifestation from another.

For this, one must always first explain what’s involved and discuss the basics, as occurred on this occasion. At least it was clear that the Abakua have made pronounced contributions to Cuban music and that there are some famous names among its members.

Fortunately they promised a second program, this next one on ethics. Let’s hope it’s so!