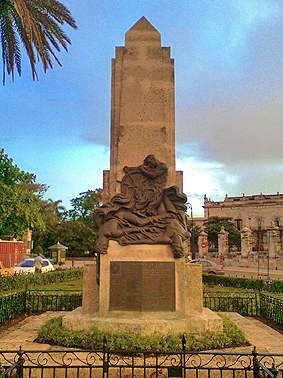 Not many people know about the monument on Puerto de La Habana Avenue.  It has a relief with some half-dressed men hopelessly hanging onto the helm of a sinking ship.

It came back to my mind because I passed by it again on May 9, the date on which the victory over the fascism is commemorated in Cuba, given the historical ties with the countries of the former-USSR*).

That same day I watched TV to see the military ceremony at the mausoleum of the Soviet internationalist soldiers.  It’s a small necropolis that guards the remains of several young soldiers from the USSR who were in Cuba and died here (practically all them due to accidents, none in combat).

As someone with a dual Cuban-Russian nationality, I always find it quite touching that the Cuban government and the armed forces pay homage to those who died in the war against fascism.

Services are held at the graves of people from the country that gave the most lives in that war, although those who are buried there were almost all children of World War II veterans and not themselves veterans of that conflict.

As it’s now customary, to the memorial ceremony attend senior-level diplomats from Russia, the Ukraine, Belarus and Kazakhstan, as well as representatives of the diasporas of those countries in Cuba.  There was even a table with small glasses full of vodka, the traditional Slavic manner of rendering homage to the dead.

There was no reason for me to have anything against that ceremony; instead, I was filled with nostalgia and a sense of solidarity with those veterans who are still alive (four former-Soviet women who survived the Second World War reside in Cuba).

But it turns out that Cubans too participated in that war, and a number of them died in it.  Several of them fought on the eastern front alongside the Soviets, while others died on ships sunk by Nazi submarines.

Others survived.  I personally know a Cuban whose uncle was with the US troops on D Day (the landing in Normandy), but after the war he went to live in the US.

It’s also said that in the old Jewish Cemetery here, the remains of people who perished in the Holocaust are buried there.

Returning to the monument in the photo, this involves precisely those Cubans who died in that war, particularly those who went down on ships that were sunk.  It’s a monument that, I believe, is not on the list of official commemorations.

Very significantly, last year a magazine published by the Russian Embassy in Cuba published an article about the monument, together with some photos.

In that same vein, I believe that the Cubans who died aboard ships also deserve an homage, a memorial.

Perhaps a more complete way of commemorating May 9 would be to do so at three sites: at the monument on Puerta de La Habana Avenue, at the Jewish Cemetery in Guanabacoa, and at the necropolis of the Soviet soldiers.  In the Second World War there were martyrs, victims and heroes from numbers of countries.  All deserve to be remembered.

* According to the German Instrument of Surrender, signed on May 8, 1945, the Second World War ended in Europe at 24:00 hours in that day, but at that time in the USSR it was already May 9, which is why in the countries of the former socialist bloc, the victory against fascism is celebrated on that date.