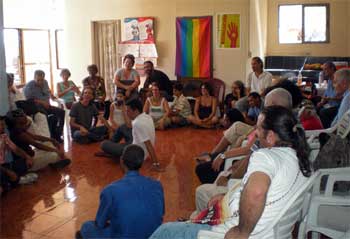 HAVANA TIMES — On May 26 and 27, the Critical Observatory Network (OC) organized the Sixth Cuban Social Forum.

As one of the initiators of these events, held annually since 2006, from the beginning we wanted them to be meeting places for people, projects and Cuban collectives that are practicing “autogestion” (self-organization) and playing leadership roles in culture, thought and the daily lives of people.

This is why last year we took on the name “Social Forum,” similar to those gatherings that take place in other countries, though in Cuba the conditions for such meetings are quite different.

We always attempt to ensure that these are not the work of one group of leaders or promoters, but the alliance of several groups.

This time the call for the forum was also signed by the international working group “Anticapitalismos y Sociabilidades Emergentes” (“Emerging Anti-capitalists and Socializing Forces”), associated with the academic “Latin-American Council of Social Sciences” – CLACSO), the independent artistic producer “Kende con K,” from Havana’s Alamar neighborhood; and the La Ceiba Community Center, where the event took place.

A feature of the first day of this sixth forum was that during its transition periods it was animated by Yadira and Ernesto, of the “El Trencito” project. They used games that taught those in attendance to recognize the diversity of characters and which helped to relieve the tensions generated in the debate.

This type of participatory dynamic teaches that not only intellectual discussion is of value. In addition, it was an example of the concrete practices carried out by these activists in their communities.

The first two sessions took place under the general slogan of the event — “@uto-organizing Ourselves?” — which made explicit the concern for technological connectivity (@) and leadership from below, from “ourselves.”

The symbol of “@” was the same one that OC held up on a banner in a May Day parade in Havana’s Revolution Square.

Those of us who organized the event tried to have in the first part of program focus on the participation of activists and promoters of self-organizing projects so that there would be an exchange of experiences on the challenges and achievements of these efforts in Cuba and for everyone to learn from these.

Now that there has been announced the gradual withdrawal of the state from various areas of Cuban life (more “self-employment” and fewer subsidized goods…), this dedication to self-organization could simultaneously help solve social problems and generate freer environments for people.

A decision made by a democratic vote determined that first each participant would make their presentation and then it would be discussed. For me, though, this was something I found unfortunate: it atomized the discussion and perhaps prevented us from seeing the forest of what today is self-organization in Cuba for the trees of specific approaches.

But the defenders of such a system were also right in that each speaker would get the same amount of time in the debate, having a certain degree of “equal opportunity.”

We began with Jorge Luis Aleman (from the Haydee Santamaria Collective) who spoke about social movements in Latin America. This was followed by the “Visitas de Alegria” project, promoted by Mayda Gil and Idalis Quinones (both from the University of Computer Sciences). Their project is led by their students, who assist older people who live separated from their families.

Gisela Arandia, an activist involved in the rights of people of African descent, spoke about “organizational challenges of the black population and black women in Cuba.”

Based on her presentation, the discussion began to “come down to earth” in the area of inequalities of opportunity and representation suffered by Cubans as a result of their skin color, gender, age, political opinions or simply because of where they live. I think that many people are still unaware of these inequalities.

More dotting of the “i’s” came from LGBT activist Luis Rondon, who addressed the complexities of the visibility of sexual diversity in Cuban cyberspace.

Likewise, Alien Garcia (from the magazine BlackHat4All) explained the shortcomings of digital connectivity options within Cuba, independently of the operation of the mysterious Venezuelan undersea cable.

His presentation simply showed what any inhabitant of Cuba could do if we had opportunities for access to the Internet, beyond the exorbitant hourly rates recently established by the government.

However the hottest debate was spurred by Adolfo Cabrera and Miriam Real, promoters of the projects Talento Cubano, Garage 19 and Miscelaneo, which have given impressive opportunities for multimedia, audiovisual and internet access to dozens of artists from various provinces of Cuba…
I think this is just the kind of effort that multiplies possibilities for low-income projects, as does the highly visited blog “La Joven Cuba,” where three young guys at the University of Matanzas promote their ideas while also giving space to those who disagree. This presentation was made by Harold Cardenas.

Harold’s presence was very controversial, especially due to the controversy around the recent meeting of bloggers organized by that project in Matanzas, which generated a “declaration” that many of us considered officialist and too uncritical. But Harold evidenced not only his agility in the discussion but also his openness and respect for those who think differently – qualities that continue to be much needed…