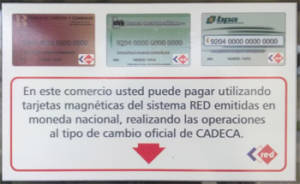 HAVANA TIMES — A few days ago I was surprised by a sign posted in a chopin (a hard-currency store) in my neighborhood. It was located right next to the register (as well as next to the store entrance, as I realized later).

It’s a truism that two currencies circulate in Cuba.

Perhaps the most pathetic corollary of this fact is that the dual currency — more than representing inequality with regard to the access to foreign currency (generated from remittances, tourism, the mixed sector, work contracts and travel abroad) — conceals rampant income inequality.

While it’s possible to purchase convertible pesos with national currency pesos, the true complication is being able to get enough money (either in convertible pesos or “national” pesos) to meet one’s personal or family needs (whether basic or not).

The poster in question announced that people holding RED system magnetic debit cards could use these in that chopin to pay for purchases in local currency, of course at the officially established exchange rate.

The RED system operates for three Cuban banks (Banco Popular de Ahorro, Credito y Comercio, and Banco Metropolitano), which issue debit cards for accounts into which the wages of Cuban workers in some sectors are deposited (with these salaries being paid in local currency, of course).

There still aren’t many ATMs in Cuba, and very few stores have terminals where you can use those debit cards in local currency* (actually, I don’t recall having seen any).

So I was surprised by that poster in the store. In addition to expanding the use of these cards, it threatens to break one of our “psychological barriers,” one that is even more rooted in the Cuban system today.

This barrier is the tacit acknowledgment that there exists the possibility of buying goods in a chopin with the “money from one’s wages” (of course, only if you have a RED card).
—–
* Magnetic cards are not always viewed as “conveniences,” because the vast majority of products and services are paid for in cash, and these debit card holders often have to wait in long lines to withdraw their money.

9 thoughts on “The Beginning of the End of Cuba’s Dual Currency? (I)”