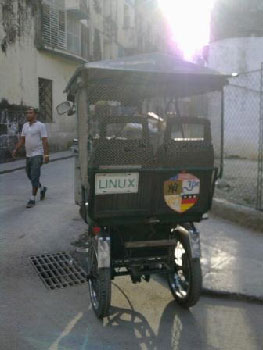 HAVANA TIMES — On the carriage of one of Havana’s bicycle cabs, I saw a veritable coat of arms.

Distributed among its four corners, I caught sight of the US and German flags (accompanied by the three stars denoting the world soccer championships won by the latter), the logos of two baseball teams (Havana’s Industriales and the New York Yankees), and the emblem of Spain’s Real Madrid soccer club. At the center, an imperial eagle.

A coat of arms that speaks to us of sports, politics, technology and, why not, of an entire dimension of the owner’s perception of the world. Next to it, I saw a graphic reference to the Linux operating system and, beneath it, the Playboy bunny.

The reference to Cuba made by the coat of arms (Havana’s baseball team, Industriales), is surrounded by elements that invoke other realities. The appearance of the spaces where we coexist is changing.

Cuban identity is becoming more and more intertwined with global symbols and allusions.

One sees this, also, in the objects and spaces related to tourism: in the numerous flags of different countries one finds at privately-owned kiosks, next to the Cuban flag, or on the T-shirts showing pictures of Che Guevara, laid next to others showing Britain’s Union Jack. 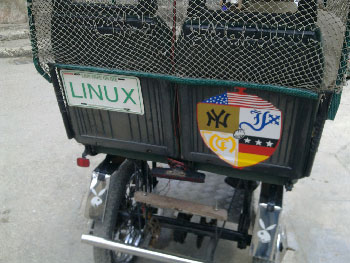 I believe Cuba’s new laws will gradually transform our conception of what is Cuban into an identity which draws from different, global sources.

This is already the case, but the physical separation that leaving the country entails had hitherto been experienced as a violent rupture, is today, it is only a moment in a flowing sense of co-existence.

Fluids sometimes form whirlpools, and some of these whirlpools remain in existence for quite some time.

Similarly, Cuban identity will progressively become a dynamic experience that is unable to exist in isolation, without alluding to other realities, beyond the coasts of our Caribbean archipelago.

Being from the town of Remedios or Santa Cruz del Norte will someday be as relevant, from the point of view of one’s identity, as being a fan of Barcelona’s soccer team or having voted for Ken Livingstone in London’s elections for mayor.

At school, our children will one day have to study, not only the “ethnic make-up of the Cuban nation”, but also those places around the world where men and women from Cuba live. World geography and history will be a pre-requisite for understanding the identities of nations.

And things will be better that way.

One thought on “Towards a Global Conception of Cuban Identity”