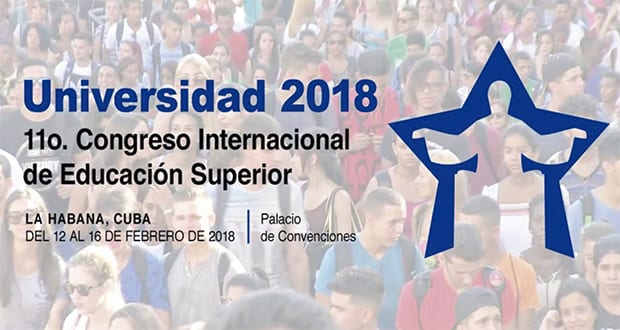 HAVANA TIMES — The 2018 International Congress of Higher Education was held in Havana, from February 12-16, with over 2,000 representatives from 60 different countries attending. The participation of dozens of university deans and ministers of Education as well as prestigious science professors was proof that Cuba has become a reference country for education, in a world where elite education dominates.

The event ended up being a space for important meetings, academic debates of a strictly scientific nature and where exchange programs could be co-created.

The Congress also confirmed its recognition of Cuba’s efforts in other countries, as well as the quality of its own education, which is the result of government-driven policy and implementing public policies which understand education to be public property and a social right.

The quality of Cuba’s higher education has a lot to do with the country’s scientific breakthroughs, as Cuba does not import scientists, like other countries do, but it trains them up and educates them instead so as to try and find solutions to the problems that science is facing today, both in Cuba as well as in other countries where Cuba collaborates.

Scientific advances in Cuba are something that all Cubans can feel proud of, as they respond to the idea put forward when Commander-in-Chief Fidel Castro said, as early as January 15, 1960: “The future of our country must necessarily be a future of people of science, has to be a future of people of thought.” In that same speech, he mentioned the need to incorporate legions of Cubans to make progress in science, because if progress in science wasn’t made, they couldn’t have sustainable economic progress.

Today, sciences in Cuba are governed by the Ministry of Science, Technology and Environment and by the Cuban Academy of Science; the latter has 265 academics from the agricultural, technical, natural and fine, social and biomedical sciences.

There isn’t a single branch of knowledge in Cuba that doesn’t have one or several scientific centers, focussed on development. Naming all of the scientific centers that currently exist in Cuba would be a never-ending task. In the agricultural sector, you can stem from the institutes of plant biotechnology, research centers for holticulture, rice, sugar cane, animal science, pasture and fodder, tropical root vegetables, as well as key research projects on tropical agriculture, to mention the most important only.

In the field of biomedical research, the National Center of Scientific Research (CNIC), affiliated with Havana University, was taked about, where scientists, who would go on to found dozens of centers which have managed to make real scientific breakthroughs, were educated and became specialists in their field.

These include finding many reagents to diagnose diseases, vaccines against deadly diseases, such as hepatitis B, therapeutic vaccines against different kinds of cancer, including lung cancer, with very good results and was of interest to US scientists, for them to use it in their own country.

One of a kind, patent medicines have also been developed such as Heberprot-P, to help heal foot ulcers in diabetics and which has already prevented thousands of people in Cuba and other countries in the world from having their inferior limbs amputated. And these are just a few examples so as to keep this post relatively short.

I just want to add that, as a result of research carried out here in Cuba, medical equipment such as electrocardiographs have been built, which are now in use all over the country; the ultramicroanalytic system (SUMA) to carry out an analysis of different diseases as well as the glucose meter and sensors to determine glucemic levels, which patients can do at home, among other things.

A small country, without great natural resources, can also make progress if it trains up scientists and technicians who can then bring about these scientific breakthroughs for the country.

4 thoughts on “Scientific Breakthroughs in Cuba”