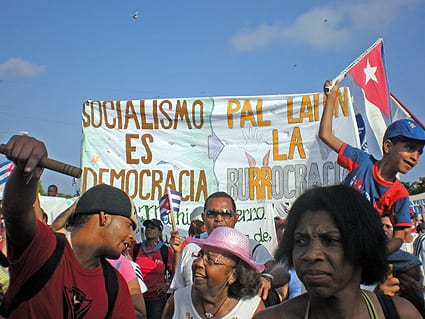 HAVANA TIMES – Since many years ago, there is a battle of ideas of colossal dimensions in this world.

On the Left are those who defend the most just ideas, who demand a dignified life for their people, with equality for all, without discrimination because of sex or race, a society where everyone has a job, where there is high quality, free education at every level and in every branch of knowledge, free healthcare and dentistry services, the right to a decent home without being evicted, developing sports and culture for all of society.

They also defend a society where human solidarity takes precedence, where we all have the same rights and same participation in the wealth that is created in the country. These are generally the main characteristics of a socialist system.

On the Right, you find those who defend Capitalism’s ideas, with different nuances, an unfair system where selfishness takes precedence. The capitalists’ fight to become richer every day, without caring about the suffering of poor people, those who are exploited, those who starve, those who die of preventable and curable diseases because they lack the means to pay for healthcare and medicines, those who live their entire lives in ignorance because they don’t have access to an education.

We have lots of examples from different places.

I have never read that there are people living on the street in a socialist country because they couldn’t pay rent, not even in Eastern Europe, or countries in Asia, much less in Cuba, where we are all the owners of the homes we live in and we still haven’t paid property tax on these up until this very day.

Unfortunately for many, reality in the capitalist world is very different. For example, in the United States, in the majority of its big cities, the sheer quantity of homeless people form a part of the urban landscape, and there doesn’t seem to be a solution on the horizon to this problem as politicians aren’t even talking about the subject. It should be a reason for shame in such a powerful country, which spends bloodchilling amounts of money on weapons in order to wage destructive wars in far off countries while it also spends millions to destabilize countries with governments they don’t like.

With just a fraction of this money, they could make homes for all those who don’t currently have one.

There are even thousands of people living on the street in old and cultured Europe and there has been news this year of dozens of people dying of hypothermia because they didn’t have a roof over their heads to protect themselves from the intense winter cold.

With regard to education, it is very expensive to study a university degree in most countries, which is why poor people generally don’t have access to an education at this level and they can’t even finish primary school in lots of places because they have to work to help support the family.

David Floyd, the father of a recent US graduate, expressed his eternal gratitude and appeared happy and honored because his son is a doctor who was educated in Cuba with ethical and moral principles, with a humanist vision.

This small country, without great natural resources, which has been suffering an economic, commercial and financial blockade for almost 60 years, graduates Cuban doctors who have them provided healthcare in solidarity with 162 countries and has also trained many of their personnel so that they can then provide healthcare in their own towns in the future.

I could list a long list of comparisons, but the ones I’ve mentioned above are the ones that clearly highlight the great difference that exists between a selfish system of “everyone save them themselves” and socialism, which is essentially a system for the people.

3 thoughts on “Socialism: the People’s System”