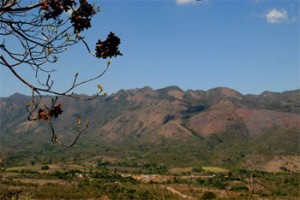 HAVANA TIMES — In early spring I went with some friends to a “Campismo Popular” public campground in Cienfuegos Province. I’ve already written two posts describing the experience, but I still needed to do this last part: the tour of the mountains.

By the third morning we were tired of reggaeton, the chaos and the campismo in general. We packed our backpacks and took off for a trail between barren hills in the direction of the mountains to the north.

We passed through a hamlet of very simple people, half-starved animals and dilapidated houses, a place that gets no more than one water-truck a week. Not a drop of rain had fallen from the sky in months and the creek bed was completely dry. None of us could even bring themself to snap a photo of this desolate place.

We followed an ascending and solitary path without knowing where it would take us, and it led us straight to the forest ranger. Without getting off his mule, the gentleman — a mixture of soldier and campesino — in a friendly manner asked us for our ID. “It’s that we have to maintain control over everyone who enters and exits this area, because I don’t know if you know it but mountains are bastions of revolution! Right?”

“Sure…of course,” we replied. He took our data and we continued climbing, thrilled that the lords of the Escambray Mountains hadn’t turned us back.

The climb was getting steeper, the vegetation more monotonous, and the sun was starting to burn our skin, so we were about to head back, but the beauty of the distant mountains was a magnet.

Finally we made it to the prize. After hours of thorny bushes, suddenly everything changed.

Before us was a precipice and a deep valley surrounded by majestic mountains – landscape fit for leading one into ecstasy and remembering the Creation as well as the creator, in passing.

We dropped our backpacks, took a rest and shot lots of pictures. In the middle of that verdant stretch ahead, we could make out a patch of houses. It was a little community that seemed strange from afar.

There was no way to keep going up, so we took any path leading down. So as not to make this into a long story, we ended up at the entrance of the valley, and of course that’s the route we followed.

Within a half an hour we were making our triumphant entry into the village of Yaguanabo Arriba (population: 190), a place that if it looked strange from afar, was even more so close up.

It’s a one-street town, poor, though not at the point of indigence. It seemed strange how quiet, silent and orderly it was – and I’m not comparing to the capital, I’m familiar with little towns out in the country, but this one was different.

Plus, the few people there gave us frigid looks, and the density of revolutionary slogans and symbols was well above the norm among campesinos.

Control in the countryside is much stronger than in the city, sometimes giving one the impression of still being in the 80’s, but this village was off the chart.

We didn’t have to wait long for what we feared. We were approached by a capo-campesino and led to an “office” where some other guy — without identifying himself — questioned us and asked for our ID.

We obeyed, taking out our IDs, and there were no further mishaps. Still, we left there a little annoyed and a little humiliated.

We hadn’t crossed any fence and there was no indication that we were in a protected park. It was one more street of Cuba Libre, and all we had done was walk along it.

Had we looked like tourists, nobody would have bothered us.

We got back to the campground as it was getting dark, and “by chance” as we arrived at the entrance we ran into a Counter Intelligence officer.