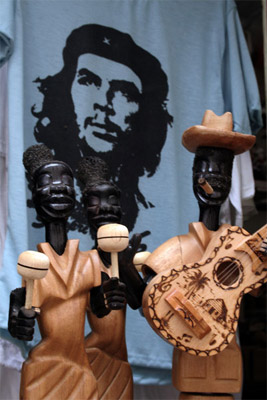 HAVANA TIMES — At some point in my life that I can’t put my finger on, Che started becoming an increasingly unpleasant figure to me.

It was many years before I took the initiative to read some of his works, and when I did I realized that my dislike for him was no mere side-effect of our media bombardment.

This month marks the anniversary of his death and, as usual, our media have inundated us with the same images and songs as always. I’m sick of it and would like to vomit up for once and for all everything that they’ve forced fed into me about Che. But I won’t do that here – out of respect for you readers. I’ll be content with taking a little revenge.

In this post I will deal with — what is to me — the terrible manner that Guevara had for understanding society, people and political education. I will base this on his letter El socialismo y el hombre nuevo en Cuba (Socialism and the New Man in Cuba).

Che believed that Cuban society (and probably the rest of societies) was divided into two groups. On the one hand there was the enlightened elite, possessing a higher consciousness and a true ideology: Marxism-Leninism. This group was, according to Guevara, the driving force of the revolution.

At the other extreme were the sleeping masses that needed to be woken up, educated, mobilized and pushed because, as a mass, they still didn’t understand the logic of history and the new values.

How would this cognitive effluvia be transmitted between these two groups? According to Che, the elite (structured like a pyramid with Fidel Castro at the apex) had the mission to educate the ignorant masses. One wonders how he understood that instruction.

Guevara proposed various methods to influence the minds of people. Sometimes he seemed to recognize that the masses did indeed possess consciousness. He may have seen it as asleep, naive and misguided, but he saw that it existed. In that case, the main ideological function (of the elite, as he understood it) was to raise, guide or straighten that awareness.

But in other paragraphs Guevara appears more cynical, to have less faith in the masses. For example when his approach to political education consists of training based on incentives and punishment — in the Pavlovian style — he saw that the difference here would be in that with humans these should be moral, preferably.

Lastly, I will deal with the topic of “The winning of the mind.”

Like with many of his comrades, to Guevara what was inconceivable (and sometimes I think even monstrous to him) was the idea of free and solitary consciousness that seeks its own truth, testing here and exploring there.

For him young minds were like virgin and passive territories whose fate was to be won by one or another ideology. The minds of the old had already been colonized, but in those of the young were deposited all of his zeal and hope.

Che proudly laid a plan and a theoretical foundation about how to further work so that young people would acquire certain values and embrace certain principles that were revolutionary and Marxist. Not God himself could have been so arrogant in the face of such raw clay.

Che risked and lost his life fighting for the poor and against imperialism, and for this he deserves respect, recognition and honor, but what a terrible place the world would have been if he or his followers had obtained, as they yearned, the supreme victory.

He had an idea of society (and especially of political education) that seems extremely simplistic and mechanical. I dare say that he disparaged the “masses” (I say so because of the dull, passive and subordinate role that he assigned them in his worldview).

It seems that in many essential aspects his thought doesn’t surpass the bourgeois and classist imagination that he himself abhorred.

But if he belittled the “masses”, he despised “non-revolutionary” intellectuals. The individual who chooses his own path through a deliberate act of consciousness is, for him, a typical representative of depraved capitalism, and therefore should be reformed or set to one side so as not to contaminate others.

For all these reasons I dislike the figure of Ernesto Guevara de la Cerna, also known as “Che.”

In a future post I will deal with the political mind set of this man, expressed in the same letter.

Here are some quotes that I have picked out with the intention of supporting the points I have tried to make here.

Then came the stage of guerrilla struggle. It developed in two distinct environments: the people, the still sleeping mass that had to be mobilized; and its vanguard, the guerrillas, the motor force of the mobilization, the generator of revolutionary consciousness and militant enthusiasm.

During the October [1962 missile] crisis and in the days of Hurricane Flora [in October 1963] we saw exceptional deeds of valor and sacrifice performed by an entire people. Finding the method to perpetuate this heroic attitude in daily life is, from the ideological standpoint, one of our fundamental tasks.

Viewed superficially, it might appear that those who speak of the subordination of the individual to the state are right. The mass carries out with matchless enthusiasm and discipline the tasks set by the government, whether in the field of the economy, culture, defense, sports, etc. The initiative generally comes from Fidel, or from the revolutionary leadership, and is explained to the people, who make it their own.

The vestiges of the past are brought into the present in one’s consciousness, and a continual labor is necessary to eradicate them.

To build communism it is necessary, simultaneous with the new material foundations, to build the new man and woman.

That is why it is very important to choose the right instrument for mobilizing the masses. Basically, this instrument must be moral in character, without neglecting, however, a correct use of the material incentive — especially of a social character.

As I have already said, in moments of great peril it is easy to muster a powerful response with moral incentives.

Retaining their effectiveness, however, requires the development of a consciousness in which there is a new scale of values. Society as a whole must be converted into a gigantic school.

Education takes hold among the masses and the foreseen new attitude tends to become a habit. The masses continue to make it their own and to influence those who have not yet educated themselves.

Aside from those whose lack of education makes them take the solitary road toward satisfying their own personal ambitions, there are those — even within this new panorama of a unified march forward — who have a tendency to walk separately from the masses accompanying them.

They no longer travel completely alone over lost roads toward distant aspirations. They follow their vanguard, consisting of the party, the advanced workers, the advanced individuals who walk in unity with the masses and in close communion with them.

The vanguard group is ideologically more advanced than the mass; the latter understands the new values, but not sufficiently. While among the former there has been a qualitative change that enables them to make sacrifices in their capacity as an advance guard, the latter see only part of the picture and must be subject to incentives and pressures of a certain intensity. This is the dictatorship of the proletariat operating not only on the defeated class but also on individuals of the victorious class..

the masses are now making history as a conscious collective of individuals fighting for the same cause..

We revolutionaries often lack the knowledge and intellectual audacity needed to meet the task of developing the new man and woman with methods different from the conventional ones; conventional methods suffer from the influences of the society that created them.

Our task is to prevent the current generation, torn asunder by its conflicts, from becoming perverted and from perverting new generations.

In our society the youth and the party play a big part. The former is especially important because it is the malleable clay from which the new person can be built with none of the old defects.

Our vanguard revolutionaries must idealize this love of the peoples, of the most sacred causes, and make it one and indivisible. They cannot descend, with small doses of daily affection, to the level where ordinary people put their love into practice.

We must strive every day so that this love of living humanity is transformed into actual deeds, into acts that serve as examples, as a moving force.

Thus we march on. At the head of the immense column — we are neither ashamed nor afraid to say it — is Fidel. After him come the best cadres of the party, and immediately behind them, so close that we feel its tremendous force, comes the people in its entirety, a solid structure of individual beings moving toward a common goal, men and women who have attained consciousness of what must be done, people who fight to escape from the realm of necessity and to enter that of freedom.

The basic clay of our work is the youth; we place our hope in it and prepare it to take the banner from our hands.