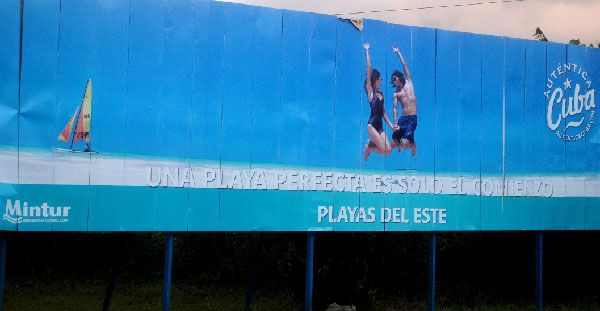 HAVANA TIMES — Children love the beach. Years ago, I took a rather enjoyable trip to one named Jibacoa, located in what was formerly referred to as “Habana campo” (“the Havana countryside”). It looked like a paradise for children.

Every morning, a fleet of large, old American-made trucks loaded with bathers from nearby towns would arrive at the coast. Though people arrived in tightly-packed groups, no one was drunk or agitated.

Almost immediately, mothers would set up camp in the shade afforded by the seagrape trees, setting up patio chairs and recliners, spreading blankets over the sand, and laying out thermoses, water bottles, dishes, cutlery, beach umbrellas and a long list of such items. The children would dart off to the crystal-clear waters and then bask in the clean sand.

At noon, it was time for a family lunch, with re-heated homemade food, and a quick nap under the sun. It looked like a bucolic scene taken right out of a painting – a way of enjoying the beach that was entirely different from life in the city.

Let’s start with city transportation. People who catch the bus to Guanabo (a coastal town near Havana), packed in like sardines, are often drunk, festive and agitated. Brawls are so frequent that bus-queues are controlled by the police, if you can believe it. Even so, things often heat up and blood is spilt in this popular omnibus.

Of course, the violence doesn’t end on the road. It heads to the sea, which does not quite manage to wash it away with its frothy, not-so-clean waves. For many, knives and bottles of cheap rum come first on the list of beach items, before sunblock and towels. Summer’s only just started and I’ve already heard of several violent beach brawls and seen the commotion surrounding a bloody confrontation.

This violent atmosphere gives the beach the appearance, not of a place where the family goes to a spend a quiet day of rest, but of a party thrown by a tough crowd from a bad neighborhood, where raeggueton blares from loudspeakers, huge amounts of alcohol and nicotine are consumed and bodies and genitals are flaunted. It is a hardcore estrogen and testosterone fest.

The sand is often dirty and it is not uncommon to cut oneself with the shards of a broken bottle. Finding a spot where one can shield oneself from the midday sun is quite a feat. There are those who plan ahead and take food from home, but most have to content themselves with the only junk food available: pizza and soft drinks.

What of the quality of the water itself? Highly dubious. From the Havana Bay area to the coast of Guanabo, there are numerous areas that are unfit for human use. Hardly anyone knows this because there are no warning signs anywhere, but several (poorly divulged) scientific reports attest to it (see my notes).

So, now you know: if you want to clear your head, relax a bit and wash away your stress with a refreshing dip, bear in mind you might return from these city beaches more agitated, tense and dirty than you were before, soaked in sewage and heavy metals and pumped full of cholesterol, kerosene, nicotine, ear-splitting noise, ultraviolet radiation and, most of all, plain old violence.

Children love the beach, but you really ought to think twice before exposing them to such abuse.
—–
Notes:

*Below are some excerpts from chapter 2 of the Cuban environmental report (“Evaluación del medio ambiente cubano”) published by Geocuba in 2009:

3 thoughts on “Cuba: “A Perfect Beach is Just the Beginning””