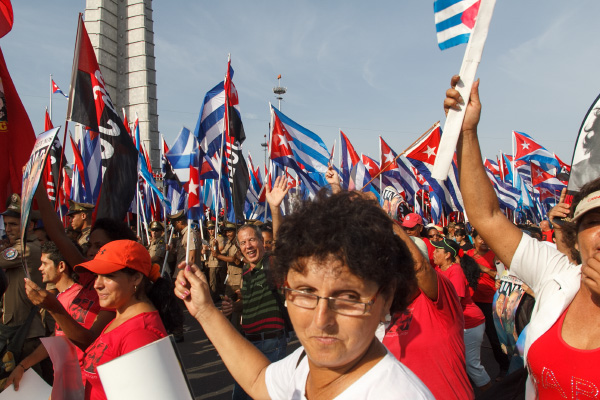 HAVANA TIMES — Following the massive workers’ rally in Cuba this past May 1, one could well ask how it is possible for people to continue supporting a regime that treats them like subordinates, violates and curtails their rights and continuously reduces their benefits.

In her article “El primero de mayo en Cuba: un “performance” que no convence a nadie” (“May Day in Cuba: An Unconvincing Performance”), sociologist Marlene Azor offers an explanation that does not convince me in the least. Azor says:

“A look at the situation from the vantage point of workers would reveal that their presence there is a mere performance of what the powers at be expects of them, enacted so as to avoid some kind of reprisal, or the price to pay for a private life with greater personal freedom.”

Then, she expounds on an additional control mechanism she claims was discovered by Vicente Bloch: workers are forced to become engaged in illegal activities and, in order to avoid reprisals, feign political allegiance to the regime (what a profound discovery!).

Some paragraphs later, she tells us this is a “process of intimidation that includes ‘punishment’ via ‘incentives’ given at the end of the quarter, the possibility of being deprived of one’s “ideal worker” status (…) or quite simply being penalized by the Party, if one is a member of the only one that exists in Cuba (…)”

If I were to summarize her thesis, I think it would be something along these lines: Cuban workers have absolutely no attachment to the regime. Their feigned sympathy with the regime is part of a rational survival strategy.

From my point of view, this does not suffice if we want to explain this “strange” behavior. Let me explain my point.

If workers were so rational and sympathized so little with their government, they would have thought of an efficacious way of casting off the yoke of the regime long ago. They would at least try to do so, forcing the regime to see their ugliest side.

Other peoples who don’t have the same history of struggle we do and other cultural advantages have known how to overcome more oppressive situations. Why would Cubans content themselves with such a cowardly posture?

The thesis is simply too absurd. I think it would be less contradictory to admit that the power that issues from above has taken root, that it descends gradually – not without running into gaps and obstacles, to be sure – through the capillaries and chains of command.

We should also add that the collective unconscious accepts the current situation as something normal, devoid of any major contradictions, and that it does not lead people to rebel or become indignant.

It’s not that there is no pressure or that there are no attendance lists during these official demonstrations; it’s not that Cubans aren’t aware of their being blackmailed or integrated into a patronage system. All of that is true, but it does not, in and of itself, explain what we’re seeing.

I’ll share an anecdote with you. I’ve been living next to a bus terminal for several years. It is a typical Cuban workplace, with a staff of extraverted and boisterous people.

One need only stop at the kiosk where the drivers quench their thirst for a few moments to hear about the daily conflicts and dilemmas they face at the terminal. The bus drivers, mechanics, and other employees don’t hold anything in: when something bothers them, they say it immediately, in a loud tone of voice and without stopping to consider the consequences.

In the early morning of April 30, all of the employees gathered outside the terminal, partying in anticipation of the extraordinary day that followed. The fact is that they seemed much happier than usual. I know this because their hooting didn’t let me sleep (as their brawls do on other occasions). Their joy didn’t obviously have to do with the arrival of May Day, workers’ day. They were simply enjoying the opportunity to be together without having to work.

I’ve seen something similar at the parades in Revolution Square. Before, I was among those who rallied there and demanded true socialism. I would rally next to other workers and the fact is that I never once felt a tinge of discontent around me.

The last time, a small group of us went along beating some drums and the people there, as ignorant of the significance of May Day as of the “coercion” they were the victims of, turned the whole thing into a conga.

Azor shoots off target again when she portrays the spectacle as a narcissistic gift the elite gives itself. The rally is a ritual and, as such, its aim is to have every one of its participant’s feel, in the deepest corners of their being, that nothing has changed, that everything remains the same, that the pact is intact. It’s not only the elite: the masses also narcissistically enjoy the feeling of immensity and power the ritual gives them.

Azor finishes off her dance with a provocative gesture that gives us a glimpse at her underwear. Her imaginary workers rally beneath the sun to a conga rhythm but that does not prevent them from reflecting on certain things, to think to themselves “let’s see when we can bring down our Berlin Wall.”

This means they’re not only rational, observant and cynical, they also have a clearly defined political objective: to bring down the wall and advance towards the reign of freedom. The only thing they need is a little push, right?