HAVANA TIMES, Feb 20 — Saturday morning I woke up as fresh as a daisy and ready for spiritual solace, but there was no gas for cooking.

According to the ration book, we still had an allocation, so I found myself with no excuse to keep me from heading out for the tank refill center here in the Alamar neighborhood.

There, a handful of community “errand boys” (though mostly old men) would be hanging around from the crack of dawn. The word had it, though, that there wasn’t a whole lot of gas left, not enough for everyone.

The woman behind me had a son working in Angola – where he owned a car and a home, had a good paying job and the chance to settle down there. As she said: “It’s rough, living here in Cuba, but I wouldn’t think of going to Africa, even if I was dead. Plus, we have more than enough blacks here in Alamar,” gesturing around her with contempt.

Ahead of me was a part-time and part-crazy doctor, though he doesn’t really practice his profession anymore. He told me that from his house fronting the sea, he could see the new oil rig that showed up recently to explore for crude off the coast of the island. 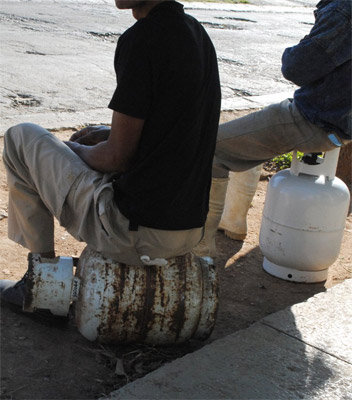 In the same breathe he told me about friends of his who in 1994 headed out to sea on rafts, though he never found out what happened to most of them.

The sun had begun to burn, as the smokers thinned the atmosphere even more. The old guys were tired and by that time starting to get upset and anxious.

What flourishes in Alamar are food stands, garages, iron fences and improvised housing attached to buildings – all constructed in public spaces and with materials “borrowed” from public works projects.

But in the public space where the line for gas refills is situated, there’s no shelter or shade from the sun. There aren’t even benches for making the wait even halfway comfortable.

When it struck 11:00 a.m., the level of concern was growing fast. The woman with the son in Angola was blaming it all on racism, while the “physician” was becoming increasingly incoherent (at least from my point of view).

By this time there was a whole crowd of people waiting, though the line was at a standstill. Those people who make their living by selling places in line were hard at work. Others were letting their buddies cut in, and even the guy who dispenses the gas was prioritizing his “private” customers.

By noon the atmosphere was tense. I knew that the gas wasn’t going hold out long enough for me, but I stayed around anyway just to witness the outcome.

In front of me people were arguing, screaming threatening, flailing their arms, growling and showing their fangs (some of them gold), anything but protesting as a group against the cut-ins.

In situations like these, it’s always the most aggressive people who win. An old man complained but he found himself elbowed out of the way like an old shoe.

I was at the point of jumping in and probably receiving a blow, but I didn’t and the old man was terrified and humiliated.

The gas eventually ran out and, without saying bye to the other residents in line, I made a 180 degree turn and headed back home with my tail between my legs.

At home we can get by with our electric cooker, but I started thinking that this country is hopeless (whether they discover oil or not with the oil rig), and I cranked out this pessimistic post.

PS: On Monday I was able to get our gas in five minutes. What’s more, the “doctor” and the old man (for who I almost humiliated myself in front of) walked passed and didn’t even recognize me.

5 thoughts on “Even if They Discover Oil in Cuba”