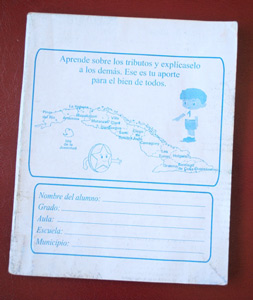 HAVANA TIMES — During the summer break, I found a Contemporary History notebook in the trash. It had belonged to a kid in the tenth grade. In a previous post, I wrote about how the history lessons in the notebook approached the first years of the Bolshevik revolution. We can walk away with a fairly clear sense of its ideological position just by looking at the fact Lenin is mentioned fourteen times while the soviets not even once. Many students come out of Cuban high-schools believing the “Soviet” is merely a term referring to the inhabitants of a particular place.

In this post, I will yap a bit more about this student’s history notebook, analyzing how it addresses the rise of fascism and the Second World War. I will then devote a few lines to the course textbook.

The basic, doctrinaire aim of the course is to convince students that the capitalist systems of European powers and Soviet socialism were two radically different, antagonistic and irreconcilable systems. The first represented ambition and egotism as completely as the second embodied the hope of a new world free of evil and the exploitation of man by man. The other main ideological maneuver in this part of the course consists in placing fascism and Nazism (those racist, war-mongering criminals) within the capitalist family, a family that is not devoid of internal conflicts but whose members ultimately protect one another.

It doesn’t matter that the Axis Powers practiced a kind of totalitarianism very similar to that of the Soviet Union, or that Hitler should have attacked the Jews as champions of capitalist ideas (according to the Protocols of the Elders of Zion), that he called for volkgemeinschaft (“people’s community”), a struggle against the “slavery of rent” and the dismantling of the bourgeois democratic system, or that he went after capitalists and communists with the same degree of cruelty.

It doesn’t matter that social scientists cannot agree as to how to classify these systems. Those who designed the Contemporary History course taught in the tenth grade have a very simple answer: “fascism was the response of the bourgeoisie to socialism, the most inhumane and reactionary expression of the capitalist system.”

It would have been more accurate and revolutionary to point out that, during the Second World War, developed states bent on expansion were the ones that clashed. As such, all of these states, including the Soviet Union, belonged to the family of the enemies of true socialism, the one that seeks to socialize the means of production and guarantee control over society by the workers and people. Asking Cuba’s Communist Party to go that far in its presentation of world history would of course be too much.

The second big scam has to do with the non-aggression and mutual aid treaty signed by the Soviets and its “irreconcilable enemies.”

The Ribbentrop-Molotov Pact is only mentioned once, in passing and, of course, without one reference to the secret clause having to do with the post-war slicing up of Poland and other European territories. Let us recall that, around 1939, when the said document was signed, Nazism was already outwardly criminal, racist and viscerally anti-socialist (in the non-perverted sense of the term).

In their advance across the territories they occupied militarily thanks to the agreement, the Soviets didn’t behave a whole lot better than the Nazis did. The Katyn massacre is a case in point. What does the history notebook say about this? What are teachers at Cuban schools telling their students this day and age?

Read it yourselves: “following Lenin’s death, Stalin proclaimed a common struggle against fascism,” “the fascist hordes lunged towards Poland,” “on June 22, 1941, fascist Germany attacked the Soviet Union, violating the non-aggression pact [the only time this pact is mentioned] and without a previous declaration of war.”

The textbook prepared for the Contemporary History course does explicitly refer to the non-aggression pact, but justifies it as a survival strategy: “the Soviet Union had no other choice,” “it was a way of avoiding fighting on two fronts,” “this way, it prevented the imperialist powers from creating a single, anti-Soviet front,” etc. The prestigious Marxist historian Eric Hobsbawm catches the lie in those claims in his History of the 20th Century.

The textbook also mentions the additional secret clause, but describes it as a violation of Leninist principles perpetrated by Stalin and Molotov behind the Communist Party’s back. The maneuver, aimed at a very naïve audience, consists in sacrificing Stalin (who is already fairly discredited, at any rate) with a view to saving the immaculate purity of the Party and its legendary leader.

The tenth-grade History syllabus is aimed at convincing students about how good, dignified and legitimate Soviet socialism was. This way, it prepares the terrain for justifying the passionate romance we had with them and the fact we copied their communist-like totalitarian system.

If, to accomplish this, one has to twist history a “bit”, there will always be ministers of education, PhDs in pedagogy, education experts and even teachers willing to lie or look the other way when others do so. Are there no intellectuals and educators with enough respect for themselves and their profession to rebel against this? It doesn’t look that way. The “natural selection” process and generational indoctrination have managed to exterminate that race.

3 thoughts on “History as Taught in Cuba: the Soviets vs. the Bourgeoisie and Nazis”