HAVANA TIMES — This post is the continuation of a previous one about our recent trip to Cienfuegos province.

Everything started when some relatives of mine in Cienfuegos booked a week’s stay at a “campismo” public campground there in that province for me and a few friends.

Not knowing what to expect, we took a look at the “campismo” website, where it was exciting to see what they wrote:

“The Guamuhaya mountain range — the second largest in the country — is the natural setting that borders one of the best sand-lined beaches of the province of Cienfuegos. Here you can enjoy the shade of sea-grape trees or chat with farmers from nearby communities to hear interesting stories about pirates as well as treasures yet to be discovered.”

Nothing bad would come from finding pirate treasures, but the promise of a beautiful beach at the foot of the Escambray Mountains was enough to get us to break our day-to-day inertia and embark on an inter-provincial journey by train.

The mountains of this region were said to be a dream-like world with lush tropical vegetation, rivers, waterfalls and crystal clear pools of water.

The journey we happily suffered for what we thought was about to come. But when we got there, all we found was this desolate place surrounded by half-parched hills, starving animals and thorny marabou brush spreading out in all directions.

THE FACILITY AND ITS SERVICES 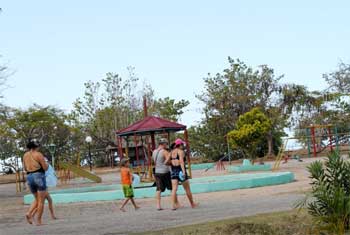 Humans find a way to make us of anything. Instead of a fence, the camping area is surrounded by a ring of marabou brush whose impressive thickness was some 100 yards, with the bushes showing exceptional vitality.

The impenetrable mesh of their branches reached to the very edge of the sea, displacing the sea-grape trees mentioned in the ad. The pace of that plant’s invasion was such that, having made it to the sea, they threaten to move into the water and take over the place of mangroves. I’d venture to say that in another  seemed like the Bay of Pigs, guns won’t be needed to stop the enemy.

But let’s continue with the campground.

As should have been expected, no pro-nature inclination was evident at the facility or in its services; the same road that leads to the resort is a graveyard of smashed red crabs.

But let’s say that was inevitable and let’s get to what was avoidable.

Reggaeton music was the constant pulse in the background, with the same songs played over and over again. The place’s unhealthy food is based on sausages and canned meats, with no vegetables and no natural fruits – nada.

There were no planned excursions to the mountains or to the natural sites of interest nearby. In every corner, animals were sacrificed for the curiosity of the campers. Even the ponies looked sad and sickly – though this was no wonder considering how they are treated.

But this wasn’t why we had come so far, so we got busy preparing our backpacks for the trail to the hills we could see in the distance. Yet before leaving we ran into two groups of gays that were there by chance that same week.

One of those was made up of white kids (what we call “white” in Cuba), the type you see hanging out at an expensive disco and who are declared enemies of overbearing gays.

The other group consisted of a mix of girls and mestizo transvestites, crazies, drunks, “drama queens” and a few “lower class” elements who had the campgrounds staff and the more conservative families present fit to be tied.

The third group of gays was our own (excluding myself for the moment), but ours was made up of gay environmentalists and mystics who still didn’t feel at home and headed on out for the hills.

Despite the strange confluence of young people with such sexual orientations, what weighed on all of us even more were the economic-cognitive-cultural barriers between us all. Or maybe it would have been just a matter of time; in a few short days, that some of those walls would have collapsed, at least that’s what I presume.

2 thoughts on “More on Our Week Vacation (The Arrival)”