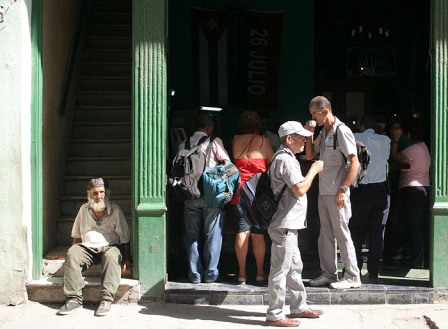 Not too long ago a law was passed approving the hike in the minimum retirement age in Cuba by five years.  A short time later, in April 2010, President Raul Castro made reference to the millions of redundant workers who would begin (and now are) being laid off or “relocated” from their jobs.

From what I’ve heard, those people who are most prone to lose their jobs are the ones last hired – and the last hired are almost always young people with little time in the workforce.

Something like that happened to my friend, Onel Calero, who only a few months ago had begun working as an art instructor at the Lenin High School.  Now he’s on the street after having to leave that position.

If the tembas (mid-lifers) are retained and young people are laid off, the combined result of these employment policies will be an increase in the average age of active workers and a decrease in that of the unemployed.

But there are additional consequences.

Bosses are typically older workers who don’t want to retire (only those in the military can live off of their retirement incomes), and older workers are usually conservative, risk averse and resigned to the island’s political system.

In addition, there’s no economic competition or any other incentives to make attractive the youth —with their dynamism and creativity— in the eyes of middle-aged and older personnel managers and bosses.

As a result of all this, a structure of employment is now being consolidated across almost all the country: one of gerontocracy and complacency.

2 thoughts on “Multiple and Generalized Sclerosis”