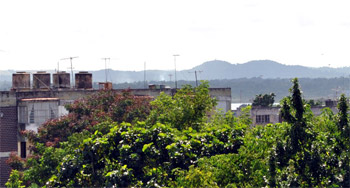 HAVANA TIMES, Dec. 8 — The “Managua’s Boobs” are a couple of hills that stand about 12 miles south of the Havana (photo 0). I grew up looking at those ridges, yearning to explore them.

Once grown, I prepared for the expedition. But just before heading out, someone warned me about the military presence in that area, so I aborted the mission.

However, exactly one year ago there came an act of divine providence that would partially fulfill that old dream.

Last winter at the junior high school where I was teaching, we had to go to a rural encampment for several weeks and they sent me to a camp close to the yearned for hills.

One boring Sunday, on parents’ visiting day, I took advantage of the lull to go for a walk and see the breasts close up. (1)

The areas all around the hills have been deforested, and there are some semi-abandon large dairy farm installations.  But just at the foot of the hills the vegetation, it’s dense and intensely green, even in the winter (2). There’s lots of moisture and dew (“el rocio”), which I’m sure is where the name came from for the community situated at the foot of the hills.

The older houses in El Rocío must have been built at least 70 years ago. They have a peculiar style; they’re simple and wooden, but not like huts – they’re more like cottages, delicate and somewhat haughty (3).

Where the asphalt ends, there begins an upward path ascending to white colored ground with utility poles on one side (4). There was still time before dinner hour back at the school, so I started up the hill in search of adventure.

In a flash, I shot up the hill to take this photo (5). Everything was pretty except for the filth pumped into the air by the outdated and polluting Antillana de Acero steel mill. They say these fumes cause acid rain, which is torturous to the vegetation and soil for many miles around.

There were kids romping around, seemingly happy, peaceful and healthy (11). Children often have good times in places like this, but I imagine it’s much harder on their parents. I didn’t run into anyone to ask.

Some people appeared to have “pulled themselves up by their bootstraps” and could give themselves certain luxuries as far as their houses were concerned, but even still, the “style” is very different from the houses back on the plain (12).

Despite all the homes around, there was no park, church, cinema, café, plaza, bodega or any other institutions or state buildings – only houses, huts and prodigious nature.

The only place facilitating written communication between residents is a precast concrete slab that sometimes serves as a mural. The slab seems like a stage for visual screaming where people struggle to include revolutionary slogans and messages of peace and love (13). The only thing missing was a signature by the artist El Sexto.

I followed the path that led me away from this self-managed community and towards another one built by “The Revolution.”

El Gavilan consists of a single, long paved street lined with houses, all of them the same (insanely the same). They’re all placed in a line and situated too close to each other, especially given their location out in the countryside (14, 15 and 16). The designers of El Gavilan must have belonged to the important “Order, Austerity and Discipline” architectural movement, which flourished until recently.

I couldn’t travel on because it was getting late, and I was afraid of them running out of the stew that they dish out back at the rural school, so I turned around and went back the way I came.

Maybe there were so few people outside their homes because it was a typical boring Sunday afternoon. In any case, I couldn’t get a close up of any of the adults. But a little dog approached me as if to say “What’s this strange looking guy wandering around here for?” (17).

I didn’t climb up the Boobs strictly speaking. I wanted to avoid contact with the military.

I bid my farewell to a palm grove at the foot of the hills and continued on for supper (18).