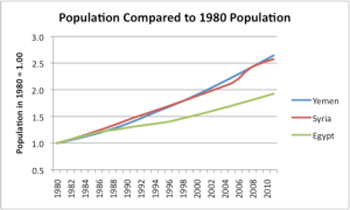 HAVANA TIMES — Every time I publish a post dealing with the energy crisis, I am showered with insults. I have been called delirious, an alarmist, a Nostradamus wannabe, a chronic pessimist, a sensationalist, a Caribbean version of Pol Pot, a poor devil brainwashed by Fidel Castro, a follower of Diogenes the Cynic, Andreas Lubitz wannabe and other flattering things of this nature.

I am not offended by these epithets. In fact, I forgive people for them. I understand that disinformation agencies have worked hard at promoting these ideas. If anyone has any doubts in this respect, suffice it to look at how the current conflict in Yemen has been treated by the media.

Yemen is up in flames. I am not talking about a political crisis; I am speaking about plain human suffering. For a number of years now, peak-oilers have been announcing the imminent collapse of this country. Here, you can read a visionary article by Gail Tverberg (published in 2013) and another piece by Javier Perez, posted in The Oil Crash.

How did the harbingers of the energy crisis know who the next victim would be? A crystal ball? Perhaps a spy somewhere is supplying them with secret information? 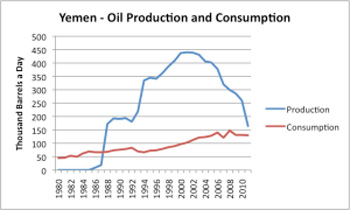 No, nothing of the sort. Predicting that Yemen would explode sooner rather than later was easy as ABC. Look at the data and judge for yourselves.

To top things off, oil production has been plummeting since the beginning of the century and barely metes domestic consumption needs today.

The result: famine, social crises, a bankrupt government, un-governability and the reemergence of old, internal conflicts.

A real powder keg. Was it actually hard to predict the explosion? Is it that difficult to understand the reasons behind it?

Of course not, it’s just a question of doing the math. Any complex analysis of the situation has to begin with this basic, ugly reality. Let’s see how the big and not-so-big media frame the issue. I chose two representative examples: a typical article of the Western press and one from an “alternative left-wing” agency.

Iran Could Begin Power War in the Arabic Peninsula (El Tiempo, March 2015) conducts a detailed, objective and non-ideological analysis of the situation in Yemen. It offers interesting information about the factions at war, warns us of the danger that the conflict may spread to other Gulf countries, mentions the international actors that support the different factions and assesses the consequences of an escalade in violence.

Yemen: Religious Conflict or Foreign Intervention was published by Telesur in April of 2015. According to the article, the war was caused by the West’s maneuvers in the region. The United States offers military and financial aid to certain groups that help it control the flow of the black gold in the region. These groups then begin to act on their own and bite the hand that fed them. The stabs that this report takes at the West do not aim at the inherently predatory and insatiable techno-productive system as such. More importantly, it focuses on the oil issue but blatantly ignores the link between Yemen’s crisis and the decline in oil production in the country.

These articles exemplify the way in which the press in developed and developing countries treat the current crisis facing the Arab world. They embellish it to hide what it actually is: a problem with no solution that has left several countries in intensive therapy and threatens global stability. One needn’t be so blunt, after all – who would want to see the stock market collapse because of mass panic?

Oil exporting countries that reach their extraction peaks and have nothing to fall back on will fall one by one. Those who foresaw Yemen’s collapse point to two nations in critical condition: Nigeria and Venezuela. Needless to say, those of us suckling at Venezuela’s teat will follow.

We still have time to avoid the worst. Let us try and wake up before it’s too late. The innocent will pay for our irresponsible ways.

8 thoughts on “The Next Victim”