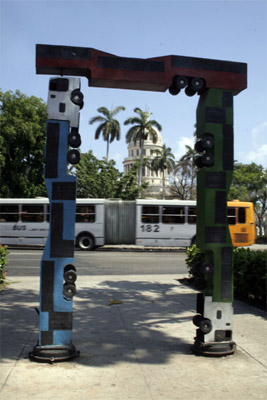 HAVANA TIMES — Living only a few miles off the coast of a powerful and aggressive military power isn’t an easy undertaking. A small and poor nation must act with a firm hand if it wants to maintain its sovereignty.

To some extent, this has justified the top-down command structure and the stiffness of its laws, but is insufficient since democracy here is conspicuous by its absence.

The idea is simple: In a democracy people fight against an aggressor out of conviction. Moreover, democracy provides human beings the discovery of their own dignity, and it’s more difficult to subdue them.

On the cognitive-emotional plane, the leaders of the “Revolution” declared an open war against illiteracy, ”bourgeois” values and other insidious and subtle pro-democracy imageries that continued to survive among people’s common sense.

To kill that restless bug, they resorted to various psychological, ideological, mass media and propaganda devices. I will cite a few:

– They totally distorted the democratic and libertarian component of the Marxist doctrine.

– They identified real democracy with “liberal bourgeois democracy,” multi-political parties and capitalism. (I’m speaking in the past tense, but all one has to do is listen to any one of the analysts on La Mesa Redonda (The nightly Roundtable television show) to understand that this struggle continues.)

– They manipulated the country’s history so that:

– All previous struggles were against a foreign enemy or for a “Free Cuba” in order to overthrow a bloodthirsty tyrant – but not to implement democracy (The cartoon series with Elpidio Valdes is a good example of this).

– They have tried to replace the idea of Cuba as a state of rights with the notion of Cuba as a Spartan brotherhood or a grand family. The insistence on calling the president “comandante” is part of that effort.

I’m not saying anything new. The battle of ideas against democratic imagery has been intense and, fortunately, is well documented.

In conclusion: If you agree with me that real democracy is the key to maintaining sovereignty in the environs of a powerful and aggressive empire, then we can identify new species of “worms,” “traitors” and people who are “unpatriotic” (to use their own jargon).

14 thoughts on “The Traitors”