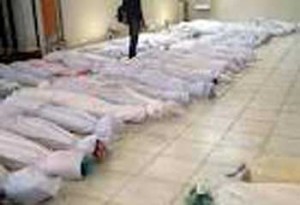 HAVANA TIMES — Even before the emigration fever hit Cuba, I dreamed of going to Syria. My sister married a guy from that Arab country, one who came to study medicine but was actually even better at storytelling.

Listening to the stories about his hometown, I ended up idealizing and falling in love with the ways of the people there (committed, serious, faithful, honest), especially since I was so disgusted with the moral laxity and superficiality of the sentiments all around me here.

Now I don’t see things the same way, though some of that youthful romanticism remains.

That’s why when the first blossoms of Arab Spring bloomed in Syria, I stopped to listen more than what most people did.

Al-Assad is a friend of the Castros, so here they tend to minimize the conflict. Nonetheless, the number of dead, missing and displaced persons is huge according to figures from the international media – more than 9,000 deaths alone. If true, this is a truly human catastrophe in the making.

It seems that on Friday, May 22, blood ran in the Syrian city of Houla. UN observers say pro-government militia fired heavy artillery (tanks included) on the civilian population.

Hundreds were killed – almost half were women and children. The secretary general of the United Nations, Ban Ki Moon, condemned the incident and several countries reacted by expelling their Syrian ambassadors.  Yet our official Granma newspaper had a very different version.

A day after the events, according to an article in the official “Communist Party” daily:

“The bands were identified as terrorists that had infiltrated the country from Turkey and Lebanon, both of which border Syria, and fired on the population at least six times, thereby forcing the army to intervene…”

So, according to Granma, the terrorists were the ones who fired on the civilians and the army intervened to defend them. This isn’t a case of the same event seen from different angles — like in Akira Kurosawa’s cinematographic masterpiece Rashomon (1950) — but totally contradictory versions. One of the two (or both) is lying.

My intuition says that they’re both lying. I think the Syrian spring has ceased being (if it ever was) a popular insurgency against the tyrant and has become a struggle between factions and bandits.

But that’s merely my intuition. If someone has a different version, please feel free to share it.

20 thoughts on “What’s Happening in Syria?”