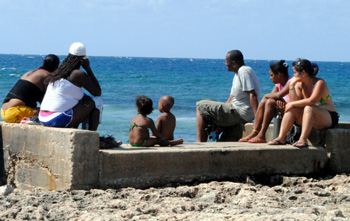 HAVANA TIMES — Since graduating from high school some three months ago, my circle of friends has been reduced (or expanded, depending on how you look at it). One left for Ecuador, two to the United States and one of my closest friends will be leaving the country any time now.

Every time one of our friends leaves, we throw a farewell party for them. Whenever anyone asks them “what’s better than leaving,” the reply is almost instantaneous: “knowing that you’re leaving!”

That the certainty of leaving the country is better than the act of departing is an early sign of nostalgia.

Though most of my acquaintances picture themselves living abroad in the future, those who do invariably suffer the same nostalgia my mother still feels when she says she will never get used to living outside Cuba, despite the many years she’s been living in Holland.

Leaving behind one’s family, friends and everything one knows to start from square one in a totally new place is, without a doubt, a tough decision. The idea of staying in Cuba, however, is even more unthinkable, particularly for the young.

Leaving the country means that one will at least be able to dream of having a house, a car and a series of other things (even if this means doing without many other things). It’s true that, sometimes, you will get home from work so tired you won’t even have the energy to sit in front of your plasma TV, but the same thing will happen to you if you stay, with the exception that you won’t have a plasma TV.

If you to stay in Cuba, having a university degree or an important position in your place of work won’t make much of a difference in terms of your salary.

A friend told me he wanted to leave the country in order to be “a person”, and his way of thinking made a deep impression on me. Could he not be a person in Cuba?

Though it’s hard for me to admit, for a generation as practical as mine, the answer is no. Despite this and the fact the majority plans on leaving the country (for it is the only option they have), many are interested in returning to Cuba with the money to set up their own business, or to work abroad for some time and come back to enjoy their money here.

We are a little better prepared for the adventure because, thanks to our relatives living abroad, we know that, even though life abroad isn’t easy, there are many opportunities there. We have no plans of having children for the time being. We are still very young. We also would not want to leave them behind if we had to leave the country.

We know how much one can miss a parent because ours left Cuba in search of a better life that took long to come along, and because we were unable to reunite with them when we wanted to.

Many a time, I have noted that, behind the superficiality and frivolity of teenagers, there lies the longing to make up for a certain lack. Maturing early is not a voluntary act but a mere survival mechanism.

Many young people in Cuba have grown up without their parents, and not only because they left the country definitively but also because they have gone to work on an international mission and can see their children only twice a year.

Many of us have grown up without someone we need, someone who calls us on our birthday, whose voice breaks up when they hear ours.

Emigrating is not only synonymous with winning – it also entails losing, for those who leave and those who stay behind.

12 thoughts on “Knowing you are leaving Cuba”