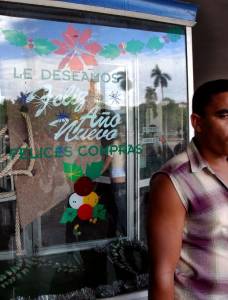 HAVANA TIMES — I recently saw a video that included snippets from Cuban newsreels aired in 1959-1960 in which a lot of emphasis was put on the fact that this year Cubans would “also” be able to enjoy traditional “turrones” and they promised that no table would be without “traditional Christmas products”, shops still offered special discounts and the spirit was quite uplifting. Once upon a time.

I imagine that the majority of those who read this post will do so from foreign shores. I suppose that in your countries Santa Claus, the reindeer, wreaths on doors and Christmas trees have been at work and put up for some time now.

In Cuba, the truth of the matter is that, except for a very few exceptions, you can hardly tell that the New Year will soon be upon us. A few “Happy New Year” posters (dates are omitted in order to maintain their owner’s dignity when they are recycled and used on other occasions), or walls that wish us prosperity in 2013 or 2012, are the only visible sign. 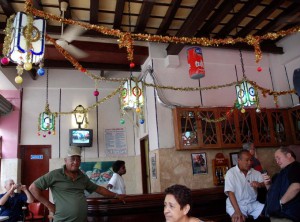 One of the things that I remember most fondly from my time living in Holland is this time of year. The snow falling on the streets and turning them white, “Santa Claus” little helpers handing out sweets on the street and the appearance of Saint Nicholas at our school. The never ending bustle while we dressed up and prepared skits.

Snow doesn’t fall here in Cuba but the joyful feeling that is transmitted in so many other countries in the world never seems to come either, and for so many of us, it just seems to pass by without our noticing it.

Sure, there are parties on the 31st, neighbors embrace one another, and someone shoots up something into the air but that’s about as far as it goes. 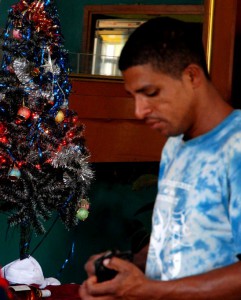 While people could save some money in other places to celebrate the holidays, here many families are still trying to make ends meet and to get to the end of the month.

The family unit and friends, something that is so necessary but is felt more on these days, also stands out for its absence. Young people marked by the stigma of emigration left their partners, parents and brothers and sisters behind.

After the countdown that marks the last few seconds of the year, parents who carry out international missions or who are simply trapped in the search of improving their economies, will try and call relatives on busy lines to send hurried kisses and hugs.

For a long time, Cuba’s official policy was to discourage Christmas as it is considered “mere consumerist craziness” or “ideological influence”. But the truth is that it is much more than this. Even for those of us who aren’t even Catholic, it symbolizes a time that has passed and an appreciation for having survived it. It is the end of a year and all of its troubles and joys. It’s almost the beginning of a new life.

Merry Christmas to everyone. Personally, I won’t be looking up at the sky as I already know… “Santa Claus doesn’t fly Cubana Airlines.”