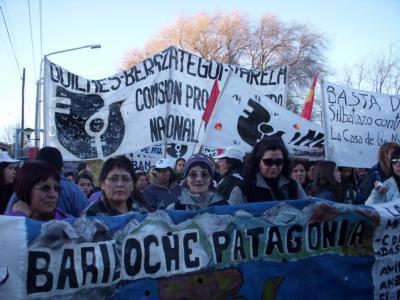 In Argentina where abortion is illegal, between 500,000 and 800,000 of these procedures are carried out clandestinely every year, without proper hygienic conditions.  Because of this there were at least 700 abortion-related deaths in this country last year, in addition to thousands of women left with serious injuries, many of which will prevent them from ever becoming mothers.

Women have abortions for a number of reasons: because they’re not taught how to protect themselves, as a consequence of not having access to free or affordable contraceptives, owing to negligence, because they don’t want to be mothers, due to the fact many bosses won’t hire them in a pregnant state, or otherwise because they were raped.

Yet conditions for those who decide to continue with their pregnancy are not very favorable either.  The great majority of these women don’t have safeguards to protect their pregnancy, and 30 percent become anemic – though they have no structured nutrition programs or subsidized assistance.  When the time comes for childbirth, “Eighty percent leave without a scheduled for future consultation and without receiving the recommended vaccines (rubella and tetanus for the mother and BCG and hepatitis B vaccines for the baby.”

All this contributes to the exploitation of women as sexual merchandise, in abuse by family members, and through excess responsibilities laid upon them for child care and housework.  If you were to add up all these misfortunes, you’d likely say it would be impossible for women to overcome them.  However, these are the struggles faced by all women, in Argentina and around the world.

How can we eliminate sexual commerce and trade without attacking the State apparatus, which  both promotes and conceals it, and without attacking capitalism, which has as a condition for its survival the physical and psychological destruction of women and the transformation of them into commodities?

The Catholic Church adopts an obscurantist posture and serves as an accomplice to the government in restricting public health care by prohibiting the use of condoms.  In this way it acts to promote not only HIV, but unwanted pregnancies as well.  In addition, in its fervent militancy, the church hampers the prevention of HVP (human papillomavirus infection), thus it contributes to incidences of uterine cancer.

Despite their facing ferocious opponents, there are working women who are struggling selflessly to mobilize the entire working class for the construction of a new society free of human exploitation of humans.

This past March 8 working women again took to the streets —backed by the whole laboring class— pointing toward the road ahead. The winning of the legalization of abortion, secular sex education and free contraceptives would breathe fresh air into the women’s movement after having suffered so much oppression and physical and social tension.  Greetings to all those struggling women; we will find them in each struggle against capital and against any form of oppression.