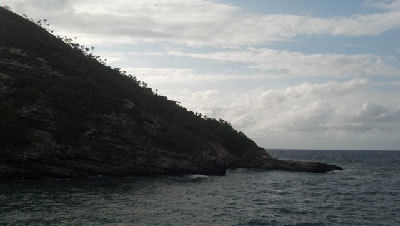 HAVANA TIMES — Canasi is a brilliant overnight primitive camping experience (or longish day trip) that will get you away from smog belching cars, people trying to sell you stuff you don’t want, and maybe even reggaeton music.

I could go on and on about the unspoiled coastline, cliffs that drop into the deep sea with little postage stamp beaches underneath rocky overhangs that provide shade and privacy all day (and night) long.  But these things can be found in other parts of Cuba; or any other Caribbean island for that matter.

What makes Canasi so grand is that to get there you have to ford a river where it meets the Caribbean Sea and parts the coastal mountains. These geographic and hydrographic barriers to access have done well to preserve this well known, but infrequently traveled, location.

The name Canasi refers to a small town on the Via Blanca, the coastal road between La Havana and Matanzas.

Accompanied by several friends, we set out in late April, mid day, via the local city bus P11.  You could also get there via collective taxi (maquina) to Matanzas, camion, rental car, bicycle, or the Hershey electric train.

We got on the P11 at the beginning of the line in Vedado at 25th and G.  It filled up quickly and the reggaeton was blaring.

We got off in Alamar at the last stop and walked a quick two blocks to the Via Blanca and started waving down maquinas.

The first few that stopped said they were only going as far as Guanabo, the last of the Playa del Este, or Eastern Beaches.  Not far enough. 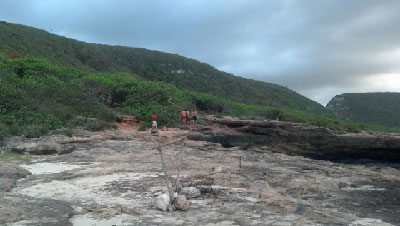 We finally flagged down a chofe (driver) of a ´58 Ford sedan who was willing to take us to the crossroads of Canasi for 8 CUC.  Deal.

The dirt road to get to Canasi is easy to find, even though there is no sign, about 30KM west of Matanzas.  There are two overpasses, one right after the other, that don´t connect to roads.  Or in other words, two bridges that begin, and end, in mid air.

At first I thought this was some way out of town installation from the last Bienal Art Event, but really the overpasses are just some unfinished projects from when the USSR paid the bills.

Anyway, our hand drawn map given to us by a friend said that coming from Havana we hang a left (North) at the dirt road before the first bridge to nowhere.  We did.

After walking a couple of kilometers we passed a few houses, a couple of bored looking Ministry of Interior types, and encountered the river we were supposed to cross.

We were timid in our approach; debating amongst ourselves if we were in the right place even though none of us really knew.

To help us find courage there was a family in the backyard of their house shouting encouraging words such as “just do it you sissys” and “abuela has more balls than all of you combined”.  Nice solidarity from the locals.

We plunged in and the small waves whipped up by the late day sea breeze broke at neck level for most members of our party. 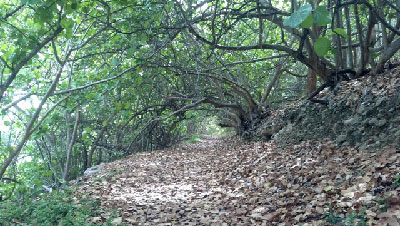 The crossing is easy enough once well oriented.  Here is how to do it:  Put everything on your head and balance the load with your hands. Shoes are optional but probably better than barefoot.  There are some rocks that go a few meters out into the river.  Walk along side these rocks and then in a perpendicular line with the river bank until you reach the other side.

Fortunately the trail on the other side is easy enough to find.  Unfortunately it is easy to find because people have left trash behind at the trail head.  Oh well, just follow the trail and not the bad example.

The trail goes up the mountain a bit, opening up into a broad leaf strewn path.  It took another 30 minutes or so of hiking, frequently interrupted by tranquil views of the sea, to reach the campsites.

Let me be clear here: when I say campsite I don´t mean a place you call ahead and reserve the week before your trip.  This is totally ¨Do It Yourself¨ camping.  Bring all your own water and food.  There are no near by medical services or tourist offices or comfy beds.  Cell phone service exists, but it is sketchy.

Once you have staked out a campground in the shade the activities include laying around doing nothing, gathering firewood, fishing, snorkeling, cliff diving and bushwhacking it through the small mountains that hug the coastline.

Other visitors will include locals from Canasi and the surrounding area doing some fishing, out-of-towners from Havana and Matanzas, plus a wide variety of birds and insects.

4 thoughts on “A Camping Trip to Canasi, Cuba”