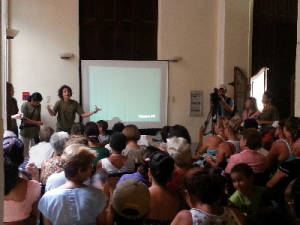 I attended one of these activities that focused on completed and upcoming restoration projects in Havana Vieja.

My goal was to learn more about how the oldest neighborhood of the city is changing with government and private investment.

I arrived at the corner of Compostela and Teniente Rey at 10 am.  I couldn’t really tell if the people I found there were waiting for Rutas y Andares or if they were standing in line for the Golden Lion Bakery across the street.

A young woman soon made her self known to be one of the tour leaders.

After sorting out the tour attendees (mostly middle age and older Cuban women) from those waiting for bread we stampeded into a room in the Sarrá Pharmacy to see a powerpoint presentation.

We were informed that the walking tour actually wasn’t going to have all that much walking.

The focus was strictly on one city block in the center of Havana Vieja known as Manzana 148 (City Block 148) which is bordered by the streets Teniente Rey, Compostela, Havana and Muralla.

The City Historian’s Office, which has turned most of Havana Vieja into its fiefdom, has big plans for Manzana 148.

This year an Alzheimer’s Patient Activity Center and a Retirement Home have opened.  Both received international funding from the Spanish Government and Basque Government, respectively. 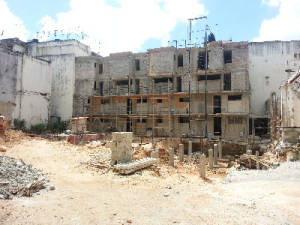 Next year (or maybe the year after) a Youth Community Center and Student Residential Housing will be completed.

Perhaps these will be funded by the Revolutionary Armed forces of Columbia and the Columbian Government as soon as the ink is dry on that peace agreement.

Other constructions are more focused on private sector revenue generation rather than asking foreign governments or resistance groups to dole out money.  These include private residences and rentable commercial space.

Overall the development was described to us as “mixed use residential/commercial/social” that would involve community input and participation through the entire process.

After being sold on the idea (I felt like I had just been to a property investors seminar) we hit the streets. Or rather the streets hit us.

Bici-Taxis, cars, trucks, vegetable carts, construction equipment and bits of falling balcony all competed for the streets and sidewalks as three separate groups of Rutas y Andares participants circled the block and looked at the new spaces being developed.

We were even allowed to enter the interior of the city block, a heavy construction zone where a couple of buildings are being destroyed in order to make way for the youth center and a plaza.

Some neighbors to the project will not be waiting around to see its completion.

There were a few “permuta” signs along the route, advertising people wanting to swap houses in order to get out of Havana Vieja.

Maybe they don’t see the future of tourists and rich people swarming over Manzana 148 as a windfall. 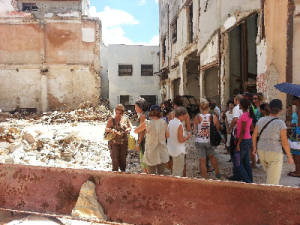 Or perhaps they want to permute before the City Historian’s Office decides to renovate their building and ship them off to Alamar or some other neighborhood on the periphery of Havana.

I still have lingering doubts about such a huge investment being made to modernize a small space while great needs exist just to make other parts of the city livable.

It is unlikely that a nucleus of development that will spill over into other nearby streets on the scale needed.

Cuban households and mom and pop private businesses simply don’t have the resources to invest in capital improvements.

Therefore, Havana Vieja’s gentrification with a human face will have to continue to be dominated by government investment.

However it was not that difficult to read the tea leaves during our short walking tour.

Reconstructed spaces are now being rented to private businesses instead of being managed by the government.

Hopefully we can look forward to more shops that sell something other than Nestle ice cream, rum, and cigarettes.

It probably won’t be long until these same private businesses are allowed to reconstruct buildings and sign leases on property that was once exclusively managed by the government.

Once this starts happening the changes in Havana Vieja, be they good or bad, will be fast.

One thought on “Another Way of Looking at Old Havana”