HAVANA TIMES — iPhones, Blackberrys, laptops and all kinds of “pads” are becoming more commonplace in Havana. This new generation of personal electronics are full of the latest apps, movies, TV shows, and news programs. This is happening with less than 5% of the population connected to the internet.

As these next-generation devices are finding a home Cuba the analogue and digital worlds are mixing in proportion not frequently seen in other countries. And it just might prove that everything you think about modern technology inevitably destroying “real” social networks is as outdated as a flickering CRT monitor.

Two weeks ago I took a direct flight from Miami to Havana. The first time I took such a flight, 2 years ago, I was one of two or three norteamericanos on the plane. Last weekend I was one of a hundred or more.

During the flight I struck up conversation with a few American students coming to Cuba. I think they had some academic mission for their two-week trip, but I imagine they will mostly be studying up on alcohol tolerance.

Besides explaining why Havana Club is a second rate rum I also answered their questions about cellular phones, internet and other digital concerns. Their technology separation anxiety was building as we descended toward the Jose Marti International Airport.

It is Cuban custom to applaud twice when the plane lands. On this flight the double dose of clapping was replaced by the American custom of taking out the cell phone and switching off the “Airplane Mode” feature. However this was not followed by hushed conversations or furious texting. No applause, no cell phones, no G4 mobile internet. We were in a cultural limbo.

As we deplaned most passengers were just looking at their paneled devices, realizing now they now had a $600 over-sized time piece in their hands. However I knew if they had a proper orientation on how we make those same devices function in Cuba maybe their despair would not have been so overwhelming.

The first time I saw smart phones in Cuba I asked myself: “Why”? There is no internet. No one can get applications or access social networking. There are no “data plans” or “hot spots”.

But it was simply a matter of time before the Cubans resolved these problems. And they did it in a way that proved that old ways of doing business, face to face, has a place in a technophile’s world.

You see, in Cuba the “App Store” is a literally a place you go, almost always someone’s home, where an enterprising group of people have found a way to download and store most Apple and Android mobile device applications. You enter the store, sit down at a computer, and start browsing the hard drive for applications you want to pass to your phone. No internet required. 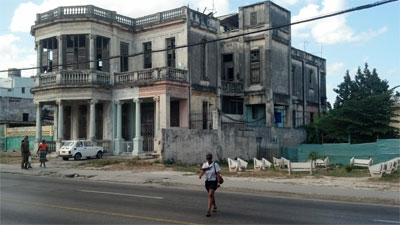 If for some reason your phone is “locked” or not yet “jailbroken” this “App Store” is more than equipped to do that as well. And your newly hacked phone can now receive, without use of internet, whatever applications you think you need. For a price, of course, that is much less than you would actually pay online.

Digital media is passed in a similar way.

We use memory sticks and external hard drives. The only thing stored in a “cloud” in Cuba is condensation and static electricity.

The other day I was watching a pirated movie a friend passed me, a really nice 1080p quality copy, and during the opening credits a message appeared superimposed over the move: “250 gigabytes of new movies, series, sports and news every week: you come to us 1 CUC, we come to you 2 CUC…” and then was the person’s name and phone number. That’s right, Cuba has even figured out effective use of “product placement”.

So for about 2.25 USD a person will come to your front door and let you copy 250 gigabytes of brand-spanking-new digital media. There is a discount for monthly subscribers. And before you thought it could get any better; there are no “service fees” or taxes imposed that the likes of Verison, Dish and Comcast are notorious for.

If your mobile device or computer happens to break there are repair shops for all types of electronics. Again, these are neighborhood based affairs. It is not a strange sight to see a worker at a table on the patio in front of a home on some busy street opening up a laptop that is worth more than the yearly salary of most Cuban state workers. Also, I should note that almost all of this is entrepreneurial.

The common theme of all of these activities is that the interaction to make the electronic devices function happens on a personal basis. There are handshakes and jokes exchanged. It is should not be difficult to imagine the friendships made while you wait for those 250 gigabytes to copy.

At this point I feel sort of bad about romanticizing Cuba’s slow progression toward digital connectivity. So for the sake of trying not to stoke long smoldering fires in Havana and Miami let me be clear that the vast majority of Cubans don’t have a smart phone or computer. In fact, most don’t even have a cell phone. The reasons: blockade, yes; impossibly small salary, yes. (I’m sure if that is not sufficient enough I’ll hear it in the comments).

But besides the more predictable excuses I also happen to know a number of Cubans who have the money for such things but fail to see any utility for a smart phone or pad or cell phone in their life.

But for those who have conceded power to the machines; we have participated in creating an interesting intersection of digital and analogue. Devices that are supposed to minimize the need to go any further than our fingertips to download an app, movie, or song are sending people all over Havana, and I’m sure in other Cuban cities as well, to make the digital work for them.

Social media and digital living are now large fields in academia and enterprise. I have read all kinds of study and conjecture about how human communications are changing, for the worse or for the better. Some of these voices, especially those critical of where digital lifestyles are taking humanity, are so caught up in how fast technology is moving that they have been unable to see the media deployed in ways not originally intended. In ways that break the mold these critics assume that technology pours humanity into. Cuba is this example of an atypical digital deployment.

I sincerely doubt that the digital (or lack thereof) status-quo in Cuba will persist many years more. People with Movistar sim cards from Chile already have internet access on their phones, even if this is a legal gray area.

I expect internet and connectivity will arrive in the form of cell phone towers before cables and Wi-Fi. (Of course I don’t know the time frame for this, a few years, less than 10? maybe?)

The “App Stores” and digital home-delivery and take-out will multiply in number while the price of internet connection remains high, but then disappear when access becomes more universal. Inevitably use of wired and wireless devices in Cuba will come to resemble the situation in the rest of the connected world.

Until then, the rest of the world needs to take notes while these analogue anomalies exist in Cuba’s emerging digital world. Perhaps in the not so distant future humans will get tired of looking at a screen all day and decide they still want their devices, but in a way that allows us to experience humanity without a bunch of 1s and 0s as intermediaries. We will wish we would have paid more attention to how the Cubans managed during the belated arrival of their digital revolution.

I must admit that I look forward to the day that I arrive in Cuba and turn on my Android phone and get a solid internet connection before leaving the plane. But I hope I don’t do that before applauding a good landing by the pilot.

As I exited the airplane two weeks ago when I arrived to Cuba I told the Cuban-American stewardess that she should teach us norteamericanos to applaud when the plane lands. She told me, without missing a beat: “Don’t worry; everyone applauds when we land in Miami.” This was more political commentary on her part than reality. When we arrive to Miami we just start looking at screens.