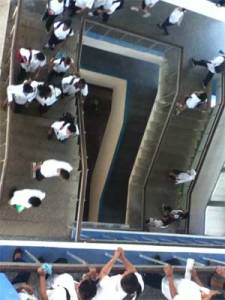 HAVANA TIMES — When asked about the lifestyle and living conditions at the Latin American School of Medicine I have often described them as “like a military barracks, but without the discipline”.

Historically the school where we study used to be the Cuban Naval Academy, which might help with the image of 6-12 people a room, living out of lockers, sleeping in bunk beds, and never out of sight or earshot of at least a few other people.

When I was reflecting on the two years I have lived here, and the few weeks I have left in the dorm, I wanted to compare dormitory life to the classic American college movie Animal House.

However the analogy would be incomplete on many levels, especially given that our campus is kept free of alcohol (if you don’t count the blood alcohol content of the students arriving back on campus in the wee hours of Saturday and Sunday morning).

Also, we live under a set of rules most university students in the United States would not associate with a fancy free lifestyle (not being able to leave campus between Monday and Thursday, for example).

So with the limitations on movement and drinking on weekdays the situation is best described as living on top of one another. And this is where the analogy to Animal House does work, because this is where the passive-aggressiveness comes in.

Loud music and primal screams are two common outlets of alpha-maleness. Here I can only speak of my experiences living an all male dorm since cohabitation is not allowed in Cuban schools.

The school tries to keep us from entering into a state of living that would qualify as a prerequisite for United Nations intervention by daily cleaning the common areas of our living quarters, including the bathrooms (no, the people that do this are not paid enough).

We are also subject to weekly room inspections by various officials of ambiguous powers: the guys in grey work clothes who write stuff down about mosquitoes, health officials in white who cringe and shake their heads, and the instructors, who know how we live, but are completely satisfied to give our room a passing “grade” as long as we shove all of the stuff under our beds or in our lockers for inspection time.

Of course some students are unable or don’t want to live communally. That is why the prices to rent a room in Playa Baracoa (a rural beach town outside of the La Habana Province) are closer to the rental prices of Central Havana than they should be.

But now we (third year students) are all preparing to leave. The school will divide us up, mostly by country delegation, and send us to different provinces. Most of us will probably not see each other again, or talk to each other again, until we get back to our home countries where the internet speeds allow for a digital social life.

We North Americans are the only ones who know for certain where we will go, as we are required to complete our education in Havana. This provokes a justified resentment from the other students.

I’m looking forward to seeing the communal life in Havana, that is, if I don’t decide to rent outside of campus. I’ve heard other students from third and fourth year compare the dormitories at ELAM as a “palaces” compared to what awaits in the city.

Among the things I’ll miss is being woken up by the water rushing to our bathroom at 6 a.m. as it comes gushing through the empty pipes and spitting out of the faucets like a chorus of angry camels.

I’ll miss the shared lifestyle, even if “sharing” sometimes includes those things we don’t want to be shared, like smells and sounds.

I’ll even miss my study space, an empty dorm room that doubles as storage for empty lockers.

But above all, I’ll miss the guys I have lived with for the past two years. I really hope we all become good doctors.

4 thoughts on “Living Communally in a Cuban University”