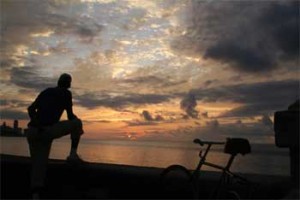 HAVANA TIMES, 27 abr — During our recent week long school break I made the decision to travel.  I’ve traveled frequently in the past. Even the complicated travel policies of being a student in Cuba are routine to me now.  I was only traveling with a backpack, but the entire trip was weighed down by a sense of not belonging outside of Cuba.

My thoughts were of my friends in Cuba who can’t travel, and a sense of guilt that I enjoy education in their country but the privileges of my passport. I also thought in terms of economic reasoning; that money spent on travel could have other uses in society.

In brevity, I have been confronting myself this last week. I am concluding that those of us that take the privilege to travel probably deserve some self reflection on this subject.

In the United States I decided early in life that a lot of material possessions were not in my future. I was intrigued by wealth, and the neat technology and toys that it bought, but not drawn to it as a light to guide my path in life.

Over the years of high school and university I became more willing to alter my preferences in life to be more consistent with what I thought a just world looked like. You know, that infrequently achieved and consistently misattributed advice of ‘being the change you want to see in the world’.

I spent the last two years of college on a military cot, living out of an old travel trunk, and keeping the windows open in the Texas heat instead of running the air conditioner. It was satisfying to get the electric bill of 40.00 USD a month for my shared two bedroom apartment when others were paying 250.00 USD.  My roommate and I considered ourselves models of efficiency.

Arriving to Cuba and being within earshot of other students (especially Americans) complaining about the conditions of group living, small beds, and lack of “space” annoyed me. I tried not to resent us for the complaints and suitcases of material culture we brought to Cuba.

After all, our delegation is supposed to be made up of mostly “underprivileged” citizens from the United States. But listening to and, admittedly, participating in the whining, shows us that “underprivileged” still contains the definition of the world “privileged”.

Part of that privilege is the ability to consume services, even if not accumulating goods. I am hard pressed to think of any other service that consumes more resources than that of travel.

I feel like being able to travel is the biggest gulf which separates my lifestyle from that of my Cuban friends. And I don’t like feeling separated from them. I do feel guilty about being able to do more.

The feeling even extends beyond the guilt which I’m sure many would argue I ought not to have. As a result of living in Cuba I frequently think about the opportunity costs my individual actions have on society.

I know that traveling and moving about uses a lot of resources that society might benefit from in other, more efficient, ways. The argument against consumption of services can be economic and rational as well, as long as one is willing to forego individual desire in weighing the impacts.

Problematizing travel is surely contentious. I still believe the general arguments for travel are better than the arguments against. Even the ideology in the Government of Cuba cannot decide this complicated matter. Cuban citizens must receive permission from the government to travel, while at the same time the same government internationally promotes travel to the island.

I came to Cuba thinking I was ready to live a meager lifestyle and become a doctor while doing so. I still know that creating a more equitable world involves lifestyle changes.

Those of us who consume more resources than most marginalized inhabitants of our societies must take this initiative. But to close the gap in the privilege of consumption for a United States citizen and a Cuban citizen will take much more fill than I had first thought.

5 thoughts on “On Traveling and Lifestyle Changes”