—The street in Alamar where my mother lives resembles a river running happily through the city. The water from overflowing sewers has taken over the streets. Automobiles, trucks, and buses pass through at high speeds in order to soak the passers-by with the fragrance that emanates from the open manholes. This story is repeated several times a year. The Public Works Department unclogs the sewer and a few months later they are again overflowing with fetid liquid. Children play around the water. 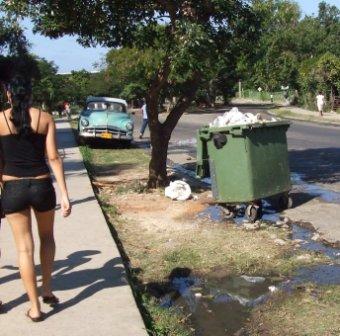 The CDR [neighborhood organization] meetings are held in a site just beside the puddles of dirty water.  The smell penetrates all the apartments. Further ahead, when you cross the street, there are several overflowing garbage containers. The garbage truck comes regularly, but it’s not enough. The neighbors pile their bags of disposable items on the ground, and we all smell and sense the process of decomposition of some elements. Other items make us suffer in other ways, noting that they never disappear.

Alamar as a whole has no culture of environmental protection. The garbage reflects this. At times the trash bins are empty and no one notices, since it’s easier to throw the leftovers into the street. All types of waste materials are dumped in the same place, without taking into consideration that not all of them are biodegradable. For this reason, when the bad odor diminishes and the “divers” (people who dedicate themselves to salvaging items from the garbage) finish picking through it, the cans, plastics or plastic bags are left to drift through the streets. 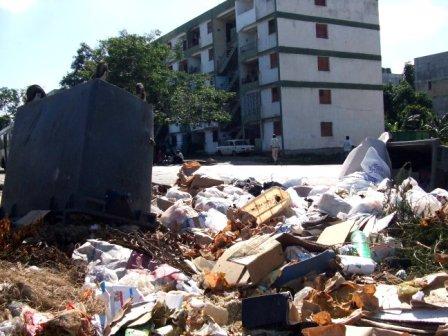 Several years ago there was television program for children here called Fraggle Rock. It was a very good series where the characters would visit Mrs. Garbage, a pile of litter who was also a kind of guru or wise woman 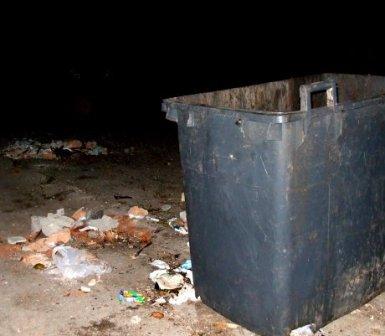 to whom they could tell their problems or worries. She gave advice, sometimes a little ridiculous, and there were some rats that accompanied her and would then chorus, “Mrs. Garbage has spoken.”  That phrase would close the visit.

I remember that program when I walk down the streets of Alamar. The garbage here is also wise, and little by little it is taking over the place. Some mice that accompany it squeal at all hours of the day and night. It’s very difficult to maintain hygiene in this large Havana suburb. People have fenced off their gardens to make them prettier, they paint their houses when they can, clean inside the apartments, but they’ve forgotten that the outside also belongs to us.