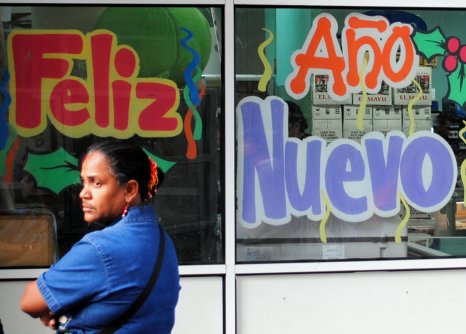 In the streets, on the bus, in person, on the telephone, or among neighbors, friends or relatives, the same expression was heard: Felicidades (as in Merry Christmas or Happy New Year’s).

Some said it in a monotone, like someone repeating the refrain of a song that’s all the rage; others bid it with force, as if those words had the effect of a magic wand and that by merely saying them all your dreams would come true.

To me it’s all the same whether someone wishes me happiness or not.  December 31 is just another day, and if you think about it carefully, it could be a depressing day that reminds us of the inexorable passage of time: It means one year less that we have left in this life.

In Cuba, people celebrate that night as if the world were ending.  They spend all their energy and all their money so that it goes by well and good things are prophesized.  Even those people who say they place no importance on the last day of the year will ask you how yours went.

My teenage niece practiced all the superstitions she knows: she burned old clothes along with a paper with bad things listed, she wrote down her desires on another piece of paper and guarded it in a bottle, and she dumped a bucket of water off the balcony at midnight.  The neighbors didn’t lag behind.

In my case, though I believe there are always reasons to celebrate, it was very sad: the mother of a very close friend died recently.  She was a charming woman who had suffered a lot before closing her eyes for the final time.  In addition, my best friend is not in the country and on the 31st I learned that another friend who lives in Valencia suffered a heart attack two months ago.

Fortunately I have other people close to me, good people who make life more bearable and who, like me, don’t put any value on any specific day of the year but on existence in general.  In other words, every day that goes by we are happy for being alive, for having the energy and intelligence to try to live in harmony with what surrounds us.

Accidentally I got ahold of a copy of Vida y Hechos de Alexis Zorba, (Zorba the Greek) by the Greek writer Nikos Kazantzakis.  While I was reading it on the night of the 31st, one of the characters said this concerning their year’s end: “I felt like my heart was losing another leaf, another year.  One step closer toward the dark sewer.”

As for me, I say good-bye to that which ends.  For that which is beginning I make plans and I smile because I wouldn’t want to end up in the dark sewer without having left my print.  I want to get back to writing a novel that I began some time ago but that has been left dormant.  I want to enjoy my friends, read a lot, learn new things, and I especially want to feel that I’m alive, but without having to keep in mind the time of the year.