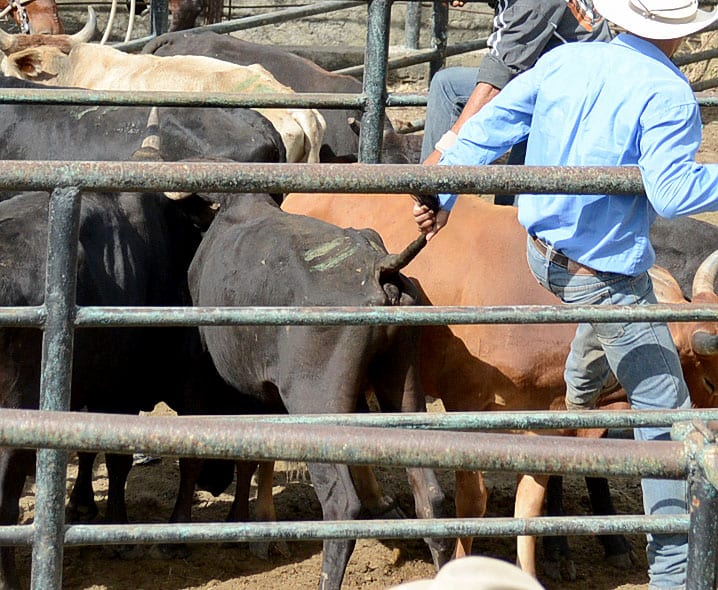 HAVANA TIMES — This mare is the apple of my eye, I look after her as if she were me myself. This is how Miguel speaks about cuquita, the mare who his daughter takes to competitions. For several years now, Miguel’s daughter is a cowgirl and she takes part in the Rodeo with cuquita, an event which some people define as an extreme sport while others call it tradition.

Those who know tell us that the first agriculture and livestock fair in Cuba took place in 1814, at the Finca de los Molinos. The first Rodeo, including coleo (dropping cattle to the ground by pulling at their tails), took place in the 1920s. The Rodeo was well received from the beginning, especially by people who have something to do with livestock, as it involved activities that people practiced in their everyday lives: tying up a young bull, climbing onto an untamed bull to break him in, riding horses. etc.

It isn’t hard for us to imagine Miguel washing his young mare, brushing her hair and patting her; a bucolic scene from the Cuban countryside. However, in reality things aren’t this poetic. Even though Miguel and cuquita probably do these things, that doesn’t mean that everything is harmony and love. Generally-speaking, human interaction with animals passes via authoritarianism and showing them our power. Oh! Humans, we who have been chosen to dominate them. This happens at the Rodeos that Miguel takes “the apple of his eye” to.

In 1993, the Cuban Association of Rodeo Cowboys was founded and that helped structure a calendar of competitions from local to provincial and national events. You can see a Rodeo at any time of the year. When you read up about Rodeos, there are some words which are never missing: skill, agility, bravery, courage; all of which are focused around people, completely ignoring the animals who these cowboys take advantage of to entertain themselves.

Who goes to see a Rodeo? I used to ask myself before going to one. Now, I can say that anyone goes, it doesn’t matter how old they are or whether they are male or female. The audience enjoys the cowgirls barrel race, the lasso, breaking in young bulls and bull riding. When cowboys change their guano hats for a bicycle or motorcycle helmet and they put on their leather chaps on top of their clothes, you can feel the adrenaline in the air.

I managed to interact with some cowboys outside of the Rodeo ring and I took away a good impression of them: they are witty, honest, kind people, who are mixed up in a dynamic of abuse that has become naturalized over the years.

A suggestion: if you go to a Rodeo, don’t just have a look at the field. In order for these cowboys to do their “job” well, animals suffer violence at the hands of these cowboys themselves and the people who accompany them.

As well as having to stay out in the sun most of the time, suffering stress and physical exhaustion (just because of a “human” fancy who want to have fun), some receive beatings and stabbings; especially bulls. I saw one come out into the ring bleeding, with his tail cut off.  When I asked, the answer came quickly: sometimes they have their tails cut off. I can’t guarantee they did cut the bull’s tail on that occasion, but something definitely happened, there’s no doubt about that, and when he came out he got hurt, that’s why he was bleeding.

For the whole time I was there, I saw that handling a bull’s tail was a common practice; it’s the cowboy’s way of moving them somewhere or taking them out. Some people also use a pipe that they let fall hard onto the animals’ backs; others attack their tender spots with their fists.

These images prove I’m not lying (they aren’t very good photos, as they were taken from a distance and the camera didn’t have a good zoom function), but they bring to light what actually happens so that the event has “an edge”. A cowboy explained that “if the bull doesn’t come out into the ring fierce, it’s no fun.” And another cowboy told me “these animals are strong, nothing hurts them.”

As I have already said, small children also go to the Rodeo and they feel superior to these animals from a very early age, feeling they can abuse them as they wish. This is how they learn how to enjoy another being’s suffering and they grow up thinking that this is “normal”.

I tried to talk to a boy who was riding on a bull: poor bull, that annoys him, plus you are in danger, if it reacts you can get hurt; then they will punish him. The boy – who was about 8 years old – looked at me as if I was crazy and began to jump up and down on top of the animal. Nobody around him seemed to be surprised.

We don’t have an animal protection law here in our country. The State promotes Rodeos as a national tradition which attracts tourism and “entertains” locals. We don’t know whether the Cuban Association of Rodeo Cowboys has some kind of regulation to stop this kind of abuse; when I searched online, I couldn’t find anything.

Abuse at these events isn’t hidden; on the contrary, it happens in front of everyone’s eyes. If you ever visit a Rodeo, you just need to change what you look at: focus on the cattle and not on the cowboys; then you will begin to see everything very differently, unless you have become dehumanized and you don’t care about anything anymore.

Or better yet, if you feel that we can still be better human beings, don’t take part in Rodeos, as a spectator or as a competitor. Don’t torture other living beings in the name of tradition. If tradition involves blood and pain, it needs to be changed.