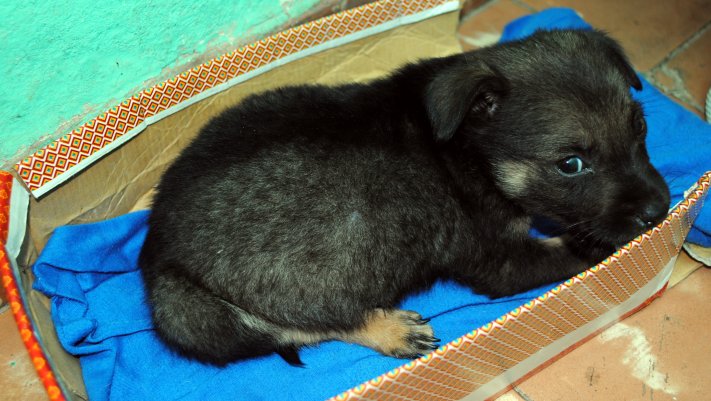 A new being has shared its life with us for the past several days.  Probably some kid found it in the street and picked it up when seeing how sick it was.  In any case, someone left it at the door of a doctor, who immediately gave it first aid.  Hours later Erasmo had it in his hands and until yesterday it never parted from us.

The first thing I felt when I saw it was a terrible anguish. I remembered the abandoned puppies that we weren’t able to save.   It was weak and sick, and my dog jostled it around, though I don’t know if he was motivated by its scent or by some evil instinct that up to then I wasn’t aware of.

The puppy doesn’t have a defined age.  It’s tiny, but its head, eyes, and paws indicate that it’s not a new born.  Despite having lived such a short time, it has already known more than one veterinarian and two municipalities, because first it was at my house in Alamar though now it’s staying on the other side of the city in the Reparto Electrico neighborhood.

It has now recovered from a prolaxo caused by the extreme bouts of diarrhea that it had when we picked it up.  It also had an illness known as puppy mumps, but now it’s at the stage where this is going away, though we’re still trying to get it to recover from a powerful attack of anemia.   Over these past two weeks it has grown; the box where it sleeps is already too small. 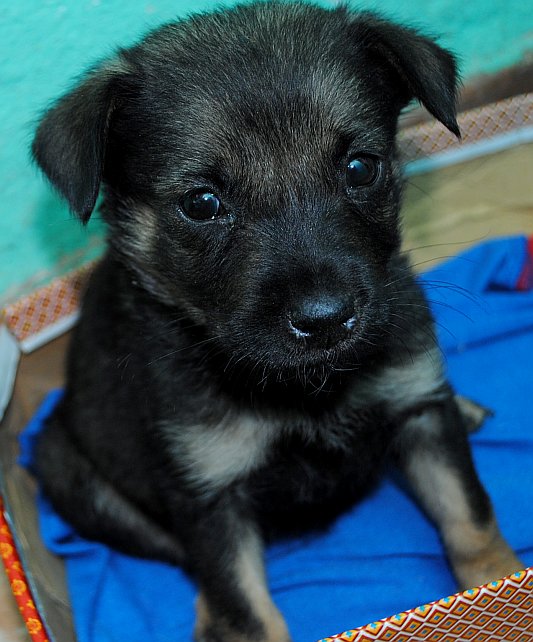 Despite the sweetness and grace that have stolen the hearts of everyone who has gotten to know her, we didn’t know what to do with her.  I have a whinny dachshund and Erasmo has Bruno.  So, we started going around in the difficult task of finding an owner for this enjoyable creature that seems devoted to living for and pleasing others.

Through this search there appeared Yeny, and — just as we expected — she fell in love with Brenda (that’s the name she gave her).  Yeny took it to her house, has been taking care of her, and they play together.

On other occasions I’ve talked about the irresponsibility of people who abandon animals to their own fates.  Now I have to highlight the kindness of this young woman.  Fortunately, Brenda now has a home.