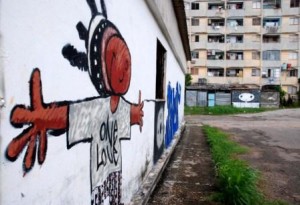 Alamar is divided into zones.

As I was walking around Zone 1 recently, noticing the kiosks closed for lack of merchandise and people talking about a pending storm, I suddenly stumbled upon the Catholic Church, unadorned but freshly painted, located near the beach.

I was surprised by the many sad memories that rushed to mind as I looked at it. I remember well the stories I heard from my parents, neighbors, and close friends. 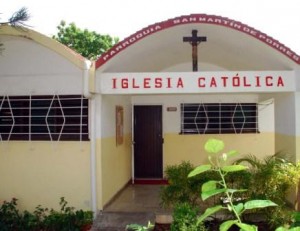 At one time only those selected for their moral values and their exemplary social conduct could live in this neighborhood. Neither pets nor religious images, among other things, were allowed in the apartments.

It was the 70’s. Commissions made up of distinguished CDR members visited homes to insure that established regulations were followed. The CDR, or Committees for the Defense of the Revolution, is a neighborhood watch organization that was created in the 60’s in response to the relentless harassment of the enemy.

Many people concealed their pendants of Jesus or the Virgin of Charity, (Cuba’s patron saint), hid their spiritual vessels (filled with water for a spirit or a dead relative), and covered their saints or virgins with a cloak to keep them out of sight.

It was difficult to go undetected. The “visitors” could even open your cupboards, closets, or any door. Not all of them did it. Some felt the situation was shameful and only came to the home, greeted the occupants, checked for water leaks and then left.

Others took it more seriously and wrote reports if they found something “suspicious.” A number of honest people were affected by these visits, losing their status even in their workplace and becoming targets of indiscrete stares. I heard these stories. I did not experience them, because I was a child. But I heard them.

Therefore, I am happy that now there is a church in Alamar, in addition to many Houses of Worship. Even the sound of the conga drum or the violin of those who prefer to follow the Yoruba religion inspires me. Now there are religious passages written on the facades of buildings. On the metro-bus there are some alienated kids who recite biblical verses and almost everyone invokes a saint whenever something goes wrong.

I do not profess any religion; but there are people who need it and have the right to believe in whatever they want without hiding it from anyone.

Today Alamar is a much friendlier place for everyone.