HAVANA TIMES – The COVID-19 pandemic has come to turn everything on its head: the economic, work, social, health, political, energy, environmental, family, individual, intellectual dynamic; there’s no part of life hasn’t been affected in some way.

This social distancing or physical distancing – as some people prefer to call it – helps us to see things from another perspective.

Every morning, I wake up and enjoy the silence I’ve been longing for years, which is only interrupted by the sounds of Nature. The bus station on the corner is no longer operating, buses aren’t on the road, drivers don’t come to drink their coffee at kiosks and cry out their woes, masculinity or prejudices. Kiosks are closed. There aren’t any lines at bus stops. Classes have been put on hold, so you don’t hear children making a racket as they walk to their schools nearby. 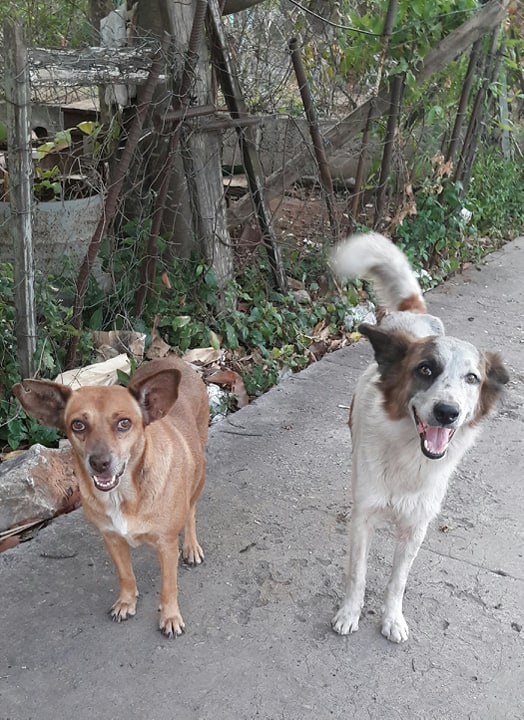 It might seem like life has come to a standstill, and it has from a social point of view, but listening to birds flutter, the breeze, feeling the sun’s intensity on the concrete, gives some life to the landscape I watch from my window. It’s even better when it rains. The rain gives life back to withered royal poinciana trees, makes the soil damp and gives animals who have been left out on the street, water to drink.

There are many, some more vulnerable than others. They used to get food and water at the bus station’s diner, but now they have nothing, and they wander through the gardens of apartment blocks, looking for help. Nobody thought about them, yet, even when hungry, they look after locals, keep night security guards company in their long shifts and give affection.

Alamar is a neighborhood with humble, hard-working, simple people. Not everybody is willing to share the little they have or invent something specific to sate the hunger of those they don’t believe to be their family. I could quote Chaplin: “He who feed a hungry animal, feeds his own soul; but I don’t.”

The urgency of survival stops many people from thinking too much about souls, our harsh reality imposes itself. For a long time now, Cuban kitchens have become places where your imagination grows, and a lot of the time, it’s only magic that allows you to feed your family; COVID-19 has come during a period of crisis (another one) and has made shortages worse. 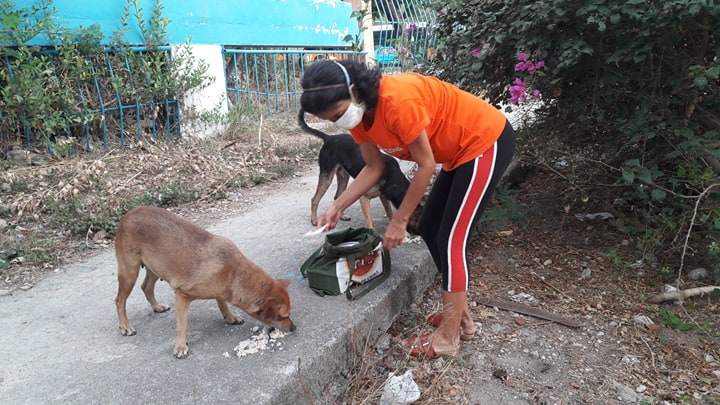 The morning silence ends when the block wakes up. With dogs and cats going up and down staircases, most neighbors get hysterical, and even throw stones to scare them away; but the animals insist, they have no other choice. Thousands of pets have been abandoned in many countries, although the WHO has said that it hasn’t been proved that they are carriers of the new Coronavirus, and has issued a statement, alongside the World Organization for Animal Health, to clear up any doubts.

In a survey they wrote up, there is a convincing answer: Animals shouldn’t become victims of this pandemic. They are vulnerable; they need our help and protection. There isn’t any scientific evidence that proves stray dogs or cats can transmit COVID-19; therefore, we don’t have to be afraid or worry about them infecting us. This doesn’t exempt us from following health authorities’ recommended guidelines, such as washing hands. 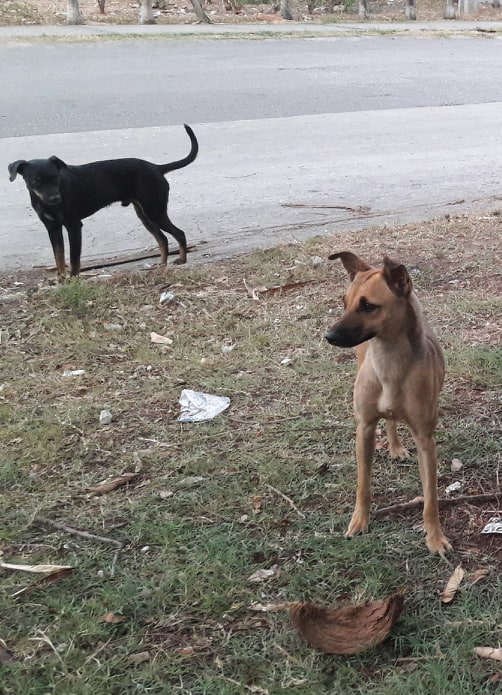 Up until now, I haven’t been in touch with anyone who is worried about this alleged mode of transmission. So, when I see some people’s reactions, I think it might be down to another kind of fear. Fear of looking them in the eye and seeing there isn’t much difference, they also suffer; understand that we are obliged to give this living being something, who needs us, who can’t get by on their own after we “civilized” them, brought them into our homes to live with us and believed we were their owners.

Amidst all of the misfortune in the world today, they have wanted to lynch Pinto, accusing him of being racist, as if dogs have any notion of race or color; the good Pirata who stopped being a cute pup and reached his full size, hardly ever letting him in their home. The caramel-colored dog at the bus station is pregnant again as, every time she gets worked up, scenes of violence/sex that her suitors offer her entertain workers, none of whom think to look after her, to sterilize her.

Rey appeared covered in bruises one day and took over the place, his skin has never healed properly, and he’s heading towards malnutrition, so it’s only getting worse. Yesterday, a black dog appeared on the corner knocking things down, and you can hear the barking of others that live nearby, they spend hours soaking up the sun or relaxing, or permanently locked up in garages without knowing if it’s day or night. There’s a pack that live at the dry cleaner’s, and there are many more in the park next door. Children and adults see this neglect, most of them indifferent. 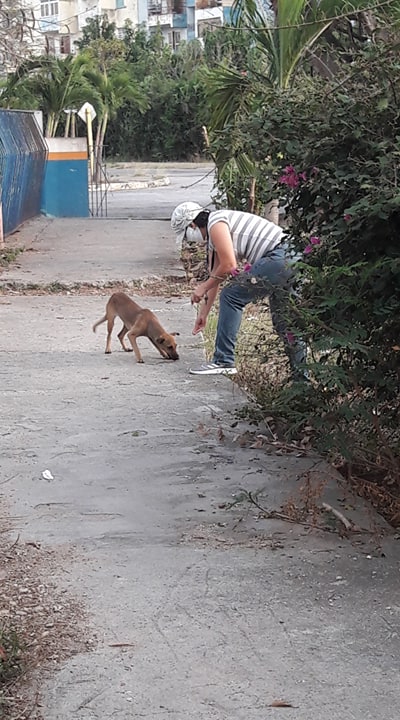 I am aware that an Animal Protection Act is being drafted to be passed in November won’t be a magic wand to reverse the situation in a flash, and November is still very far away, anyway. Cuban society needs to de-construct myths and traditions that stain this wellbeing, naturalizing pain.

The media still hasn’t given constant coverage to the good protection efforts a part of civil society is doing, with very few resources, and at the expense of being publicly scorned a lot of the time.  Promoting ideas that awaken our kindness and love for Nature should be a priority, as we are living in a news crossfire – which we receive in different forms – about abuse and cruelty: beatings, rape, murders, torture, poisoning, and an array of terrible actions that leaves a lot to be desired from our “humanity”.

In the face of this precarious situation that takes up all of our time, money and energy, I have managed to get some neighbors to give me their food scraps; I distribute them in the afternoon, although it isn’t always enough to give much to each one.

A friend asked me if we will have learned our lesson once this pandemic is over. If after living the agony of not being able to leave our homes, we will continue to keep zoos open as educational and fun places. I don’t know what to tell her… if only we take the path towards living in harmony with Nature, but I’m not so sure. 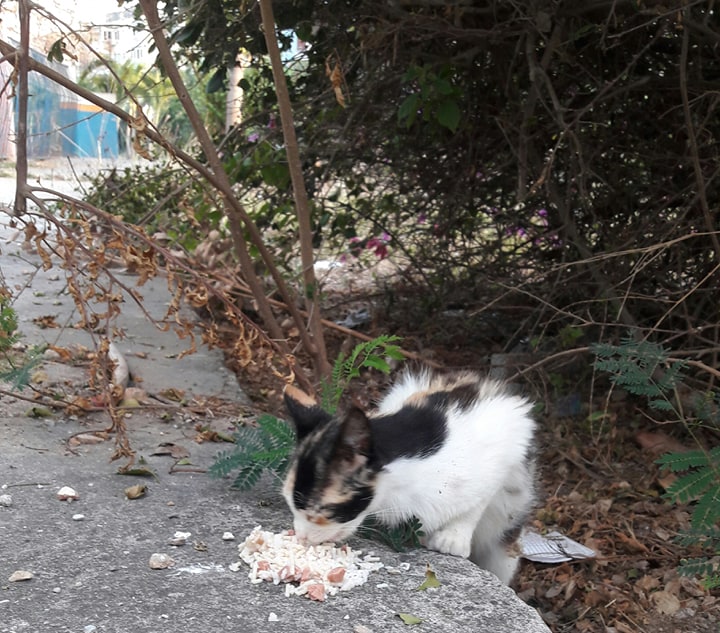 We are responsible for every life, we need each other; even so, human beings play with their own existence by testing on animals, objectifying them, taking them out of their habitats, eating them, destroying their homes. Yet, we still ask ourselves how long we’ll be like this, what tragedy has befallen us, as if we weren’t the ones to cause it.

Anthropologist Jane Goodall, who shared most of her life with chimpanzees in a Tanzanian jungle, sees things for what they truly are: “It is our disregard for Nature and our disrespect of the animals we should share the planet with that has caused this pandemic.”

4 thoughts on “The Urgency of Survival”