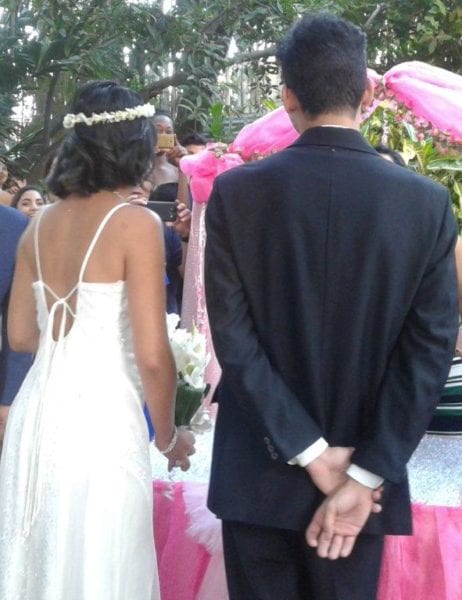 HAVANA TIMES – I don’t like weddings. A pastel pink and white cake is like a bland marriage.

Yesterday, I went to my friend’s son’s wedding and I realized how boring these ceremonies usually are; at least church weddings are elegant, and they have that solemn air that makes us feel the phrase “until death do us part” is real, although this sacred union is normally broken later and the couple send everything to hell.

Old people, children of all ages, even babies (who don’t even know why they are there), cousins, uncles and aunts, a bunch of relatives, friends, and those who come along to just have a good time, normally attend. The couple of honor are the ones who have the least amount of fun, in their rigid suit and dress, greeting everyone, without a second to sit down.

Some guests don’t get up from their seats and talk about trivialities, while others hover about the alcoholic drinks like flies. There are people who even have the nerve to talk badly about the poor buffet, about how if the couple don’t cut the cake it’s because they’re going to eat it between them at home… This is what happens in Cuba.

It just so happens that the bride normally ends up being a target for other people’s criticism, for example: if she is pregnant when she gets married and her bump is noticeable, comments abound: something along the lines of “you can see it even though she’s wearing a corset”, “poor kid got saved by the bell and won’t be a bastard”, “is it the groom’s kid, or is he taking it on?”

I think having a wedding and spending money you don’t have is a truly stupid thing to do, the aftershock is huge. Why fill up other people’s stomachs at the expense of your parents’ and your own pockets?

Running away somewhere with a beach is a more attractive idea and will be unforgettable.

Running away to Paris, any city in Italy, Las Vegas, maybe New York, must be exciting for those who can afford to do it.

At least in the US, guests have the courtesy of giving presents and envelopes full of cash to the newly-weds. Not a bad custom, depending on how practical and useful the donations are.

My cousin, who was born in the US, got married years ago to her high-school sweetheart. Her parents spent a fortune on the party. There was a DJ, waltz and they ordered delicious canapes. A year later, the young couple got divorced. She barely kept the photos and videos of the wedding. The boy was wiped off her hard disc forever.

A friend told me a story that made me laugh: him and his girlfriend got married during the Special Period in Cuba. They got married so they could buy the cheap crates of beer that were allocated to newly-weds and sell them. A business that gave them money to buy food, which wasn’t easy to come by back then.

A whole treatise could be written about weddings here. Maybe it’s an interesting thing to do so that everyone has their own story to tell.

I made the mistake of inviting my boss to my wedding. When she saw an imitation pearl necklace around my neck, she predicted tears and pain in my marriage.

To put the icing on the cake, my future husband came to the wedding absolutely wasted.

5 thoughts on “Weddings… What a Joke!”