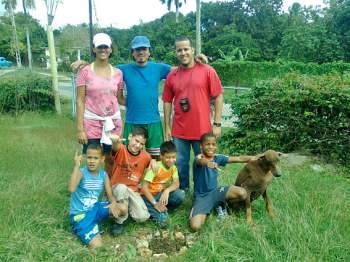 The time we’re provided in this life is what’s most precious.  What we do with it and who we share it with is a personal decision.  That’s why I was dismayed when a co-worker told me that she wouldn’t “waste time sowing.”

Her remark caused me to reflect.  In fact, I have many things that I’m behind in doing.  I need to visit my family in Pinar del Rio, where my grandfather is very ill.  I need to spend more time with my partner, because sometimes people take for granted that everything’s going well — we assume so —  and we neglect our relationships with others around us.

I have a book of poetry that I need to finish writing, and I need to focus on presenting it in national and international competitions since that’s practically the only way I can get published.  I will have to put a good bit of time behind that effort because it’s not an easy task.  Up to now I’ve only published one book (Oboe), but that was in 2005.

At my job, we’re starting to transition over to Linux.  That means I’ve had to study up on the operating system to be able to install it and assist the rest of my co-workers.  Maybe it’s not that complicated a chore, but it will take time. 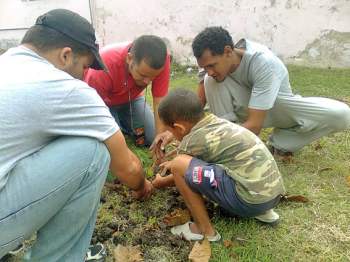 Friends wanted me to come to the New Year’s parties.  I need to study the new government “Guidelines” for the discussion of them at my job.  I have to go buy groceries, seeing as how this morning I ate the last egg in the house.  In short, I don’t have time to fritter away.

Notwithstanding, does this mean that sowing is a waste of time?

To find a plot, prepare it, fill the plastic bags, sow the seeds or cuttings, water the shoots, protect them from insects (or any neighborhood vandal) that might wreak havoc on the nursery, locate spaces that need reforesting, transfer the shoots, re-sow the plants, water them later to guarantee their survival, and from time to time check to see that weeds don’t strangle the new trees… all that takes a lot of time.

But each step is like a single verse that one writes.  In each step the friend at your side teaches you a better way to do it, or some religious or cultural implication of the process, or something about the species itself.  Each step requires that you stop to think about yourself as well as to give thought to another living being. 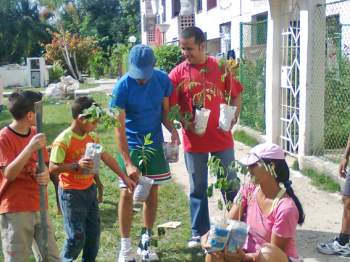 Then you understand that plants are not inferior beings, but poetic beings.  The whole destiny of a plant depends on the site where it is germinated.  From there it has to confront what comes: hurricanes, floods, droughts, electrical lines, over pruning, being banged around…  Surviving in the city is a miracle.  It is an act of resistance and of love for life.

The poet Antonio Machado admired a dry old elm tree that had grown its last green branch.  Face to face with the imminence of the death, this was its last gift to the world.  Was the most important thing about this branch the oxygen that it breathed into the atmosphere or its green color on the grayness of the streetscape? Can one measure something like this? Can you buy something like this?

I know one can’t.  And the idea of being free, that no one can buy me, that too is beautiful and it makes me rejoice.  That’s why I devote time to sowing, even when I have other important things to do.  For that reason, a few weeks ago I spent an entire Sunday in the Reparto Electrico neighborhood sowing alongside Erasmo, Jimmy, Mario, Yudith, Yoel, and a troop of kids who always work diligently together with us.  We planted trees at the community’s cultural center, at the school and on the edge of the highway. 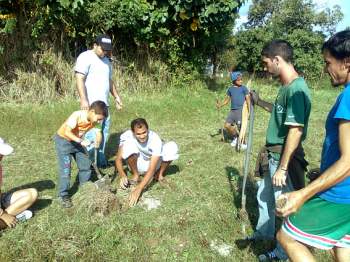 For children it’s not necessary to tell them in advance; it’s not necessary to ask them to jot it down in their day books.  As soon as they see the loading of the sacks with the shoots, the picks and shovels, the going and coming from Erasmo’s backyard, they invite themselves to join in and offer to do whatever’s necessary.  Will we be teaching them something or are they instructing something to us?

I think there’s no better class than the one where we learn about plants and how to sow them, where we learn about their resistance mechanisms and how they survive in a hostile atmosphere.  To see an old tree dominating an entire corner of a city block, this is to understand that it has been successful, that it has conquered vileness and that’s why it offers its goodness to all.