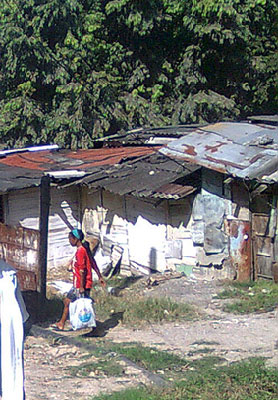 HAVANA TIMES — Indalla is a shantytown located in the heart of the Cuban capital, whose existence even the president of the municipality where it is situated was unaware of.

At the boundary between Havana’s west-laying municipalities of Marianao and La Lisa, this marginal neighborhood was discovered a few months ago by the mayor of its own local government, while sanitation units were conducting a health inspection in the area.

The outbreak of cholera in Marianao last year put sanitation authorities on alert for several weeks, and some of the inspections conducted reached Indalla, which had been contaminated by the foul outpours of the Quibu river and where three cases of cholera were registered. 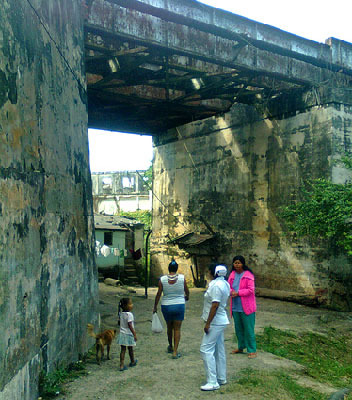 The poor families who live in this neighborhood had never before had the “privilege” of being visited by the mayor, not at the illegal settlement of numberless houses where they continue to eke out an existence.

Several of the houses in this slum are located directly beneath high-tension electrical cables, something that is both illegal and extremely dangerous, to the point of putting the lives of its residents at risk, but, apparently, the local government turns a blind eye on this, having no real alternative to offer these people.

The neighborhood was informally established at the end of the 80s and beginning of the 90s, when there were plans of constructing a laboratory for the Jose Antonio Echevarria Higher Polytechnic Institute (CUJAE) in the area. 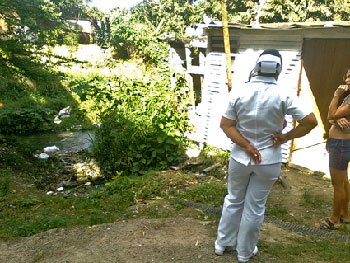 Large quantities of materials were taken to the site, but construction was halted with the onslaught of the Special Period economic crisis. Despite the frustrated plans, many people stayed and settled there, employed at CUJAE’s cafeteria.

Others, according to a resident, grew marihuana and sold it at the moderate price of 5 Cuban pesos per beer-bottle cap of the herb.

Today, the walls of the neighborhood show symbols of the Abakua religión. Though attempts to found a congregation there were made, the initiative was turned down by other, neighboring religious organizations.

I can only hope the government will pay these places more frequent visits, not to evict its inhabitants (as was recently done in Guanabo), but to help these Cuban families who live under very difficult conditions.

One thought on “Indalla Is Located in Cuba”