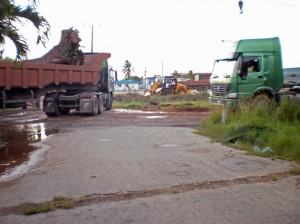 The Guardabosques Project has discovered more information about the cutting down of a grove of casuarinas trees in the town of Santa Fe. For the time being, all of the construction work has halted.

I’m sure that many readers know that I work with a group of activists in an environmental project called “El Guardabosques.” Some of its members have provided me with very interesting information about what happened in Barlovento.

I found out that the sponsor of the development project, the Ministry of the Interior (MININT), had been waiting nearly two years for the building permit. They also had to wait several months for site preparation permission.

These details are significant because with so much time in advance they could have informed the local authorities of People’s Power (City Council) and the public about their intentions. Clearly they didn’t feel it their duty or obligation to do so.

According to one source who declined to be identified, the tree cutting that was done was under a license for “forestry” operations,” but it didn’t specify whether the work referred to the government Forestry Service, which is the entity responsible for granting such licenses. The grove included a Royal Palm tree, which the ministry was concerned about due to this possibly complicating the licensing process.

Indeed, Article 4 of the Cuban Forestry Act states: “The royal palm, Cuba’s national tree, is an integral component of our forestry’s heritage, and its promotion and preservation enjoy special attention.”

In addition, Decree 268 issued by the Council of State in 1999, provides special protection to the royal palm. Article 5 provides for fines of 300 Cuban pesos, in addition to the seizure of the trees felled without permission as well as the confiscation of equipment used by those who cut down, strip bark, ring; or cover these trees with posters, paintings, billboards or advertisements. Nevertheless this was not respected and the license was granted.

The exact impact to the vegetation that was growing in this park was the loss of a one “flamboyán” fire tree, a royal palm, three “ocuje” trees and eighty-three casuarinas.

It was also confirmed that the houses to be built will be awarded to Coast Guard officials, a body that belongs to the Interior Ministry, in addition to benefiting the same people who are running the project.

There are two causes for the work having stopped for the moment. The funding has yet to be approved for the foundation work for the project, which will require a great deal of material due to the lack of firm ground at the site, as was clearly explained in a letter circulating on the web.

Also, the members of the construction crew have been seen taking measurements of the area, but they have not realized any additional construction work per se. They are waiting for another company to install the drainage system, because — according to our source — a while back the Cuban Telephone Company (ETECSA) did work in that area and covered over the system.

We now know that managers of the development are aware of the actions of the Guardabosques and community activists from Santa Fe, although they haven’t responded to any of us. Based on feedback we’ve received, the atmosphere is heated and the villagers are adamant about their complaints and claims. Recent rains have caused flooding in the area, confirming the fears of the population.

One positive occurrence is that their demands have reached the newspaper Juventud Rebelde, thanks to writer Jose Alejandro Rodriguez. This journalist referred to the alert sounded by citizen Daniel Morales concerning what happened to the casuarina grove and other difficulties posed by flooding and the construction of new buildings in the locality.

Santa Fe activists have not been left sitting on their hands. They continue pressing for the stoppage of the work and they recently filed a formal complaint with the Council of State that was signed by each of the area’s residents.  In this they warned of the dangers of such construction and demanded respect for the community and nature.