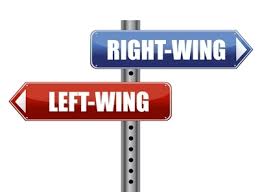 HAVANA TIMES — In the interest of contributing to the far-from-archaic debate about Right and Left, I would like to share some of the ideas I’ve developed about what defines a right-winger and a number of ways to identify these individuals.

1. They almost never recognize themselves as right-wingers. In fact, they consider it puerile to think in terms of Right and Left. Hierarchical distinctions are also unconvincing for them. They are more comfortable speaking about a certain “diversity” that includes the right to live under a bridge or to be charitable millionaires, depending on one’s mood.

2. They are staunch defenders of democracy, but do not ask themselves who decided that their country should go to war, raise income taxes or build golf courses.

3. Every night, they light a candle and set it before a statuette of the angelical Merkel. They don’t let anyone say anything bad about her. More moderate believers set up altars with photos of “alternative capitalists” like Dilma Rousseff, Vladmir Putin or Xi Jinping.

4. They support freedom of the press, provided it guarantees the growth of their capital or that newspapers attack a well-defined jugular.

5. They are respectable people from well-to-do families, governed by high moral standards. They would never allow a female or male prostitute who works on Saturdays denigrate a Sunday family dinner after Church or a meeting of their party.

6. Left to their own resources, they are compelled to do the good – which is when they set up a free-market economy where the fox can hunt freely in an unprotected henhouse.

7. They love private property so much, that they sometimes make public or common properties their own, with a view to guaranteeing their optimal performance.

8. The more progressive among them can even accept that there are “good” and “bad” capitalists, but they of course also recognize the right of both to amass fortunes at the expense of others and to co-exist peacefully.

9. They loathe any social arrangement which does not clearly define who is the owner of the children, the home, the village, the country.

10. They make for wonderful company when one wants to have a civilized debate, without violent outbursts or raised tones. They fully understand how a civilized person ought to behave and they have exquisite taste in art and museums.

Note: For the time being, while things remain this way, some continue to call themselves “left-wingers.”

6 thoughts on “Ways to Spot a Right-Winger”