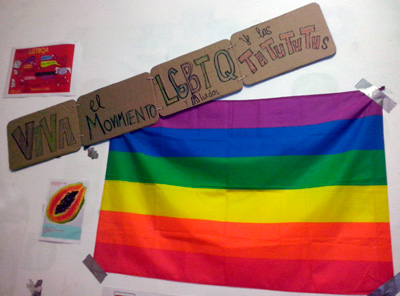 HAVANA TIMES – Formal relationships between people of the same sex is already a reality in several countries in our region. Despite an official discourse that occasionally seeks to appear inclusive, this has not yet been achieved in Cuba…and it looks as though it won’t be achieved in the near future either.

It’s been more than a decade since the National Center for Sexual Education (CENESEX) advanced a bill that sought to modify Cuba’s Family Code through the Federation of Cuban Women (FMC) and the National Assembly’s Commission for Youth, Children and Equal Rights for Women.

According to what people linked to the CENESEX say, the new law would legalize same-sex marriages.

The fact of the matter is that neither I nor any LGBT activists I know have ever read the text of this document. In addition, very little on the subject has been said in Cuba’s official media.

On May 12, 2014, a few days after the Regional Conference of the International Lesbians, Gays, Bisexuals, Transsexuals and Intersexuals Association of Latin America and the Caribbean (ILGALAC) concluded in Varadero, a Round Table program addressing the issue of LGBT community rights was aired.

On that occasion, the head of legal services of the CENESEX Manuel Vazquez Seijido was directly asked about the legal status of the bill in question. In his reply, the legal expert offered absolutely no information.

Mariela Castro, director of the CENESEX, also offered no information on the status of the bill, though she did express that the Cuban revolution should approve the new Family Code to become more revolutionary, adding that the world was expecting this of Cuba.

To top things off, Cuba’s Granma newspaper recently published an outrageous article that described the current Family Code as an “example of legal progressiveness and superiority in Latin America.”

In December of last year, in view of the lack of news on the matter and the interest that the members of the Proyecto Arcoiris (“Project Rainbow”) have on the subject, I wrote a letter to Cuba’s National Assembly, directly asking whether the said bill had been submitted and, specifically, about same-sex marriages.

“We have received your letter expressing an interest in the status of the discussion about same-sex marriages. In this connection, we would like to inform you that, to date, the National Assembly of the People’s Power has not received any Family Code bill. That said, any modification to the code will be made public on a timely basis, as is the norm in these cases.”

It is almost a mockery that, after so many years since the bill was drafted, is often mentioned at international events and is presented as an achievement in Cuba; the bill should not have been formally submitted to the National Assembly.

Because of the excessive delay in this, Cuba’s LGBT community continues to suffer discrimination; unable to enjoy, among other things, the benefits of the legal protection afforded by marriage or civil unions, which can be accessed exclusively by heterosexual couples.

Thus, Cuba does not uphold the Yogykarta Principles or the rights enshrined in the UN Declaration on Sexual Orientation and Gender Identity, a document signed by the Cuban government.

To be continued in Part II…