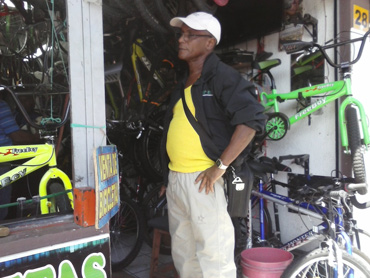 HAVANA TIMES — “I’ve always had a bicycle, but I’m in love with this particular one because it was tailor-made,” my brother Luis said to me, polishing the bike he brought from Ecuador.

When he saw I was interested in the subject, he began to tell me about bicycles, cyclists and the State policy towards these in Quito.

“There are workshops everywhere in Quito where you can get bicycles built to your specifications. This is one such bike,” he said, pointing to his “space ship.”

“It’s a shame we Cubans couldn’t continue that project we began during the Special Period, in the mid-90s!” At the time, people believed that every Cuban family would have at least one bicycle to mitigate the collapse of public transportation and fuel shortages, among other things.

“Today, transportation continues to be a problem, and saving energy will always be a concern as well. Perhaps, through the new foreign investment and self-employment policies, the bicycle lane infrastructure and bicycle parts industry can be revitalized. Of course, it would require a preliminary study.”

“Hold on, hold,” I said to him. “That’s all fine and good, but you’re pedaling too fast. They have to guarantee food and security for people first. You talk this way because you ate well over there.”

He went silent…and went on:

“The government promotes the use of bicycles through the media. They have a bicycle day every Sunday. They also have bicycles for all tastes and financial possibilities. They have protected bicycle lanes, like the ones we had in Cuba, but with surveillance systems,” he concludes, going back to his polishing. I said to him:

“No, and you won’t see them in Quito either. This one is ‘Made in Me’,” he said, trying to make me jealous of his English.

I told him the idea wasn’t bad, but that Cuba lacked a policy that could adequately study the possibility of securing foreign funding for the sustainable and safe implementation of something that could become the country’s future transportation system, as it is in other countries.

“I have this bike, for the time being,” he said to me when I was finished talking.

“Wanna take it for a ride?” he asked me.