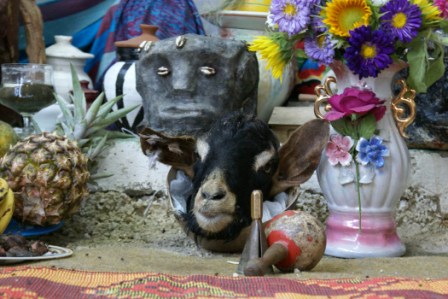 It’s a tradition in Cuba to make offerings to the orishas. For a long time this has been used by people seeking harmony with those Afro-Cuban gods.

But I’ve never seen as many offerings as lately under ceiba trees and royal palm trees in the parks of the city. In these spots you can find everything from squash, bananas and guava to the heads goats and birds, though never those of pigs.

“It seems other places don’t exist where these ‘worshipers’ can place their offerings. The parks are full of fetishes and mystic sacrifices,” I commented to Juan Carlos, a friend of mine who practices the Yoruba religion.

‘Why do you say that?” he asked me apprehensively.

“I don’t see those things in a good light. Far from cleaning us, they taint us. How can a person clean themselves spiritually and then just leave that stuff in a park where your children might play, or where the odor of decomposing oblations gives off such a generally negative energy. I know you’re not to blame for this,” I commented — more to provoke him — adding, “You’re one of those people who follow religion with complete ethics and aesthetics. I’ve seen you work, but I’d like to know your opinion.”

“My brother, you’re absolutely right. I practice the Yoruba religion, but it’s necessary to have greater consciousness of those things. One can do good on one hand, but if you don’t know what you’re doing, it can come back on you.

“Sometimes people cleanse their bodies with a jumble of tree branches and then they just toss them anywhere, even in places where they themselves have to pass by.

“The same thing happens when those offerings are left in parks, in addition to the other consequences that you already know.”

I agreed with my friend, because people have to mature. I’m sure it’s not the orishas telling them to leave those remains in parks.