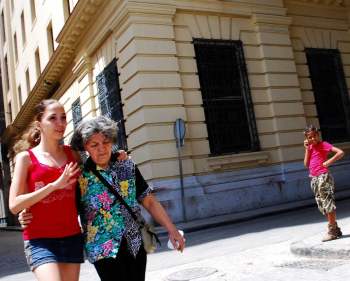 HAVANA TIMES — “The pregnant women’s seat, please?” was heard in the center of the bus. It was a woman who was asking for that seat. It wasn’t for herself, though, but for a young woman in an advanced stage of pregnancy. Still, no one replied.

“Please, can’t you give up a seat to the pregnant girl,” I said, softly tapping on the shoulder of the guy who was trying to ignore her. He looked at me with a frown, but he had no choice but to give up his place.

On the bus you could hear people whispering about the incident, as I realized that another woman, somewhat elderly, was also standing up. Her manner was befitting of one of those ladies who never lose their poise. Speaking eloquently, she said:

“If this is how it is today, what will it be like in the future. This isn’t something new; everyone has known for a long time there’s a certain number of seats on buses designated for pregnant women and the physically handicapped. But many people still turn a blind eye, looking out the window or acting like they’re asleep. Others seem to forget that they were once in the bellies of their mothers. And this includes ourselves, sometimes we sit there with our partners doing the exact same thing.”

This isn’t an isolated event.

We often see how elderly people too have difficulties getting seats on buses for the same reasons.

If we consider the rate of aging among the Cuban population, we can envision in the not too distant future seeing all the seniors standing up while the young people sit comfortably peering out the windows.

It’s time to start thinking about having all the seats on the bus just for pregnant women, the handicapped and the especially elderly. We need to be concerned about the well-being of our seniors.

One thought on “Our Seniors’ Well-being”