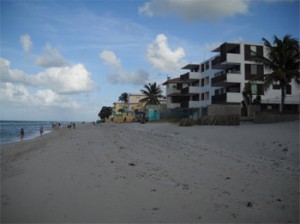 HAVANA TIMES — “Sir! Sir! Excuse me!” someone yelled to me while I was dozing off in the sand, lying under an umbrella.

“Is this your stuff? he asked.

“Yes,” I said, still unable to tell who it was.

“Don’t fall asleep. You need to keep an eye on your things. There are a lot of people walking around here on the beach and they can steal them.”

After he gave me that warning, I thanked him.

He then continued along calling attention to others who had also fallen slept. It was then that I realized he was a police officer – though he was dressed in shorts, a t-shirt and a baseball cap.

While I was there — supposedly watching over the belongings of all my colleagues, who at that time were swimming — they realized something was happening and came out of the water to see what had occurred.

I told them what had happened and we started discussing everything from how people don’t watch out for their belongings while at the beach, to thefts and the absence of places to check valuables. We then recalled those places that used to exist on the beach when we were kids who came here with our parents.

At those places where we would leave our stuff, we would put everything in a bag, check it in, and later pay a little something for the service. In return, you would be given a numbered small metal tag with a piece of cord tied to it so that you could put it inside the waistband of your swimming suit.

If you happened to lose your number, you would have to wait there until after six o’clock, when they would go through all of the unclaimed bags.

Though there have always been people at the beach willing to steal, the practice has spread.

Undoubtedly the police have helped to minimize the problem of theft, which is serious.

However, I think it would be possible to situate stands along certain stretches of the beach for reintroducing the service of guarding people’s valuables.

Alternatively, this could be a good idea for the self-employed, who could provide that same service during the summer season.

2 thoughts on “Theft Prevention on the Beach”