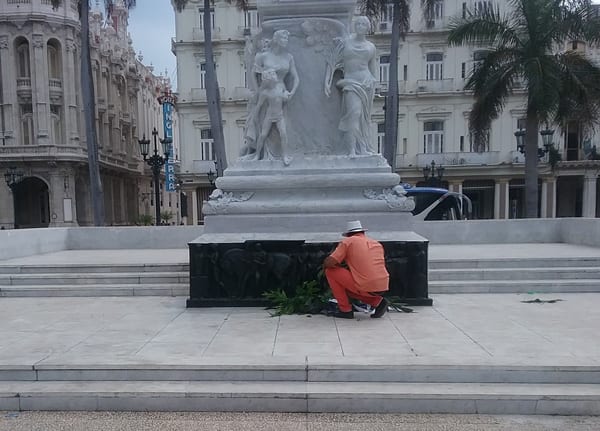 HAVANA TIMES — This phrase and other ones like it have come to light as some kind of reflection in some discussions, in a brief exchange of words or even on the spot, as if the person speaking has just discovered this.

The episode that made me think about this deeply was when I was walking through Parque Central in Havana.

I spotted a group of young people leaning against Marti’s statue. Not respectfully but the opposite: they were pulling flowers off a wreath that had been placed there in tribute. Laughing and pushing each other, they ruined the group of flowers, leaving the ground in a jumble of mixed up leaves.

Unfortunately, everything happened really quickly, I could only take a picture of a man who did the same afterwards, he stopped to steal a rose which remained in the battered bunch.

I remember seeing a similar scene on Obispo Street when PETA came to visit, but it was more violent. As part of their Veganism campaign, as well as speaking and handing out leaflets, young activists also brought pens in the shape of fruits.

Some people leapt at the free gifts, like when the pinata breaks at a party and children forcefully push their way through to grab more sweets than others. But seeing the same behavior in adults older than 30 years old was embarrassing. The PETA representative looked scared because she thought they were going tear apart her suitcase.

However, it wouldn’t be a sad thing if it weren’t that Cubans no longer show the slightest respect for our history, values, work or society.

A peanut seller can give you a cone of peanuts and when you open it, you discover nearly all of them are burnt. Or you can ask for a juice at a cafe and find that it has fermented, after paying for it. Just like if you go to a public toilet, you can already get a whiff of the nauseating smell of urine and even built up feces.

Cisterns on toilets don’t work a lot of the time, but there is always somewhere where you can fill up a bucket of running water. However, some of those who are responsible for cleaning them, don’t even worry about unclogging them and it seems like their only work involves sitting down, demanding the peso (CUP) from every unhappy customer.

However, to coin the phrase which seems to hold more and more strength everyday, when passing by the cinema in Alamar recently (which has been closed down for as long as I can remember), they have installed what seems to be privately-run children’s park.

A sound system was blaring loud music. I could hear the lyrics more or less say:

Tell me what you feel when you’ve got it inside (…)

I looked around. I didn’t see any adults scandalized because their child had heard this. Maybe they relied on the fact that they wouldn’t understand the meaning of these words. Maybe they were tired and they only saw an opportunity for their kids to have fun, running around in circles until they get dizzy on the equipment, using their excess physical energy so they would go home and be more calm.

Maybe “respect” is too much of a sophisticated word when survival continues to be a basic daily struggle. Maybe they feel that complaining is just a waste of time, and why should they wear themselves out if, like so many people say around here, “there’s noone here who can fix this.”

4 thoughts on “Cubans Have Lost All Respect”