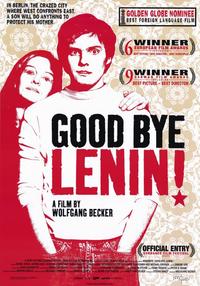 I remember the premiere of the movie Goodbye Lenin at the Havana International Film Festival a few of years back. I went to see it at the small cinema on 23rd and 12th, which was overflowing with people. Expect for those with special passes, almost nobody in line, including me, had entered the cinema when they informed people that it was already full.

I later left Cuba, but recently saw that film here in Japan. I watched it on DVD at my home in the company of my wife. Maybe it was the distance from Cuba, or the time that has passed since the film’s premiere, or perhaps the years that have gone by since my turning 30 have begun to weigh on me; in any case, that same movie-so demanded and defended in its time-now didn’t impress me that much.

In it, a young guy in the former socialist Germany tries to mask the surroundings of his mother, who has just awakened from a coma. He does not want his pro-socialist mother to suffer from the fact that the Berlin Wall fell during her state of unconsciousness.

This is more or less the synopsis of the movie. Despite my thinking that the theme of the two Germanys could have been approached with greater depth, there were two things that I liked about the movie.

One is that the director, from the former Federal Republic of Germany, took care not to turn the film into an advertisement in favor or against socialism or capitalism. Another quality was that the work clearly showed the need of some people to put a mask on reality to maintain the life of a system that is already dead.

The first of these achievements expresses a personal complaint that comes from the exhausting nature of pamphlets, or at least of the crude ones, while the second one expresses a bit more than a complaint, it conveys angst. After so many years behind a mask, will their naked eyes be able to see the light of day without going blind? Is there some sort of solar protector against the new reality? Will one, after seeing, understand and do something good, after so many years of maintaining a fixed stare on other mental structures?

If you want to make people see something, you must take into account who are the people one is trying to change, and who are the new prophets or healers. There are many ways to exterminate; a Hitler lies hidden within each one of us.

When I hear so many people talk about finally removing the bandages from the eyes of all of the Cuban people, and to start speaking clearly so that we truly advance, I join the choir. But I don’t see anybody thinking, for example, of such an elementary thing as whether there exists something that can be called Cuban, some idea that unifies the people of Cuba under a single name.

For the search for change to go beyond the personal, it’s necessary to wonder if there exists a feeling of belonging by the Cuban citizen for her/his country. To respond to that question would help us to know if there must be a change in the lives of a few united groups of people or of a thousand directionless individuals.

A while ago, I believed that the idea of Cuban nationality was on the back burner, suspended under the supreme duty of defending the country’s accomplishments. I remember that was a popular idea of control-like a similar situation, in war or peace, in which a soldier does not think, he/she only follows orders.

After a war, one is be able to exercise judgment, but the Cuban individual remains on a war footing under the physical threat of being invaded by the United States, and under the ideological threat of the ideas of capitalism-so peacetime never comes.

Several generations have now lived like this. People have learned how to throw a party while in the trenches, but also how to feel freed from the responsibility of their having to think for themselves.

Falling in the bed with my wife after seeing Goodbye Lenin, we thought about our own masks, the one that belonged to me, of course, being that of the emigrant. Now it seems like a Disney fairytale to be able feel dignity in being emigrant.

I’m not one of those persons who pound their chest and shout “My homeland!” Homeland for me is the place where you can give love. The other homeland-the one that you cannot offend even in speech, the one before which it is necessary to bow one’s head, the mother of all that we are-I find that ideal homeland too much like the Mexican movies of the golden age.

That was a time when there was no difference between the lion that marked its territory with urine, and people who, guns blazing, defended their land to the death.

I want to free myself of weapons now and to walk lighter toward a world that doesn’t need enemies. Roam and for the nurtured fatigue of life to be my homeland. This is saying good-bye to war heroes and beginning to be a simple person who works for his own peace.