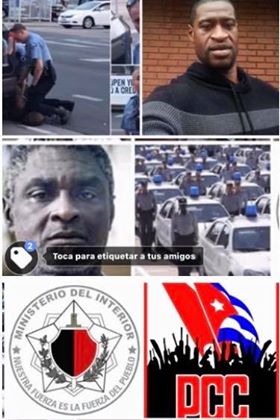 HAVANA TIMES – When I woke up, the first news of the day was that Cuban political prisoner, Silverio Portal, was left blind in the eye after a beating in prison. A couple days before, the video of a white cop with his knee on the neck of George Floyd, 46, went viral.

Floyd died in the 21st century lynched by a racist. His last words were: “I can’t breathe.” As I write, that phrase rings in my ears, amid the crisis that has generated the strange mutation of the Covid-19 virus that also causes suffocation.

Protestors in Minneapolis, the US city where the crime occurred, and others around the country and even abroad, demand that justice be done. They demand that the four police officers be held accountable after the authorities’ initial ambiguous statements regarding the incident.

A long list of homicides of this type preceded the murder of Floyd, which shows that this is not an isolated case and what makes the difference is the graphic video. The power to capture the moment without later manipulating the facts.

I put a post on my Facebook wall with these same images and wrote: “Two men, one from the US, George Floyd; Another Cuban, Silverio Portal, both are victims of abuse of power and discrimination.

Floyd was killed by racist police; Portal lost vision in one eye after a beating in prison, he suffers political discrimination. Why can Cubans speak fluently about racism in the United States and clearly criticize the US judicial system? Because there is an acknowledgment in that country that there is a problem.

Why can’t Cubans see clearly the injustice committed against Portal? Because in Cuba the existence of political prisoners is denied. It is not recognized that there is a problem, that all Cubans do not think the same way. The first injustice has a face, that of a policeman; the second doesn’t because it is systemic, it is an individual against an authoritarian power.”

Immediately the reactions were noticed. It caught my attention that the majority of the opinions were from Cubans who do not live in Cuba and the ideas fell on racism. Many condemned the injustice against Portal, but there is still a lack of real understanding of a phenomenon that dates back to the very beginning of the revolutionary triumph with the execution or long sentences of opponents.

This is a message that David Díaz left me in the post: “I knew of your position against the Revolution, but you have to be heartless and ill-intentioned to make such a vile comparison and manipulation. I hope you have been well paid. Ungratefulness can be unlimited, in your case it is, and it’s a pity, so young and well educated in this beautiful, humane and supportive creation. It would be hard to find someone more ungrateful”.

In Cuba, contrary ideas must be swept away with filth. Accusing me of being paid for saying what I think, in addition to all the adjectives, only aims to turn me into trash. That is exclusion, isolation, discrimination. It is changing my voice, distorting it. It means stripping my ideas of cleanliness, just like what happened with Silverio Portal.

Portal has been in prison since 2018 for alleged crimes of public disorder and contempt of Fidel and Raul Castro. His health is delicate. The sentence is four years. Through another prisoner, Diario de Cuba learned that he received the beating at the hands of prison guards.

Political rejection determines social position. The best paid jobs in Cuba belong to the Ministry of Tourism. Many tour guides, for example, are members of the Communist Party. In any workplace, to move up you will have to prove the ideological loyalty that does not question.

Independent workers, since they must be supplied on the illicit market, in the absence of an alternative, are controlled through this illegality generated by the Government itself. Teachers are required to be absolutely aligned, just as university students feel threatened by exemplary expulsions.

The names of Laura Pollan, Oswaldo Paya, both deceased in strange circumstances; Orlando Zapata another who died in prison because of his ideals; the scientist Ariel Ruiz Urquiola, who was also inoculated with HIV in a prison; the severity that Xiomara Blanco suffered, due to a bacterium that she acquired in prison; All these names add to the long list of people damaged in these 61 years. It is time to articulate movements against political hatred in Cuba.

29 thoughts on “Racism in the USA, Discrimination for Political Reasons in Cuba”