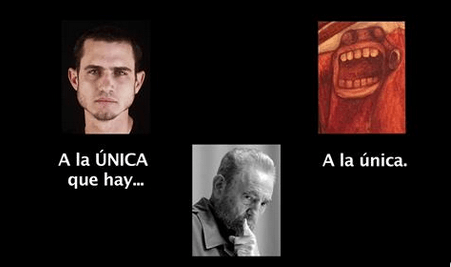 HAVANA TIMES – Almost a month ago, the video of an interrogation with artist Javier Caso went viral on Cuban social media. Why? Because it’s the first time that a medium-quality audio has been leaked, and given the fact that all the leading figures in this case are artists, there was a humorous touch, so that the truth not only turns our stomachs, but also entertains.

A great challenge, bearing in mind the fact that while I was transcribing the audio file so that it flowed, because my partner and video editor Miguel Coyula believes it’s always better to add subtitles to the video, because the agents weren’t speaking very clearly and the microphone wasn’t as close as one would like. To tell you the truth, I felt sick after hearing the conversation over and over again. I was hurt.

Those agents intimidating Javier, in the calmest way, stuck in my head for hours. It’s clear that they have been given this power. They threatened him with his family, later they carefully asked (as if they knew they were walking a slippery slope) about his sister’s fame, who just so happens to be internationally-renowned actress Ana de Armas. They also used an aggressive tone to question Javier about his friendship with us, while they accused us of receiving money from the CIA.

It’s true that the tormentor, henchman and thug exist in every society, they just need a green light to feel fulfilled. But it’s also true that it’s not in human nature to want to be bad. The British TV series Black Mirror came to mind. Everything happens within an alternate reality. One of the episodes was about soldiers, who had been given the order to execute a group of people they called “cockroaches”. Viewers saw human beings, but the army really did see something else.

German playwright Bertolt Brecht said: “It is sweet and fitting to die for the homeland, crude propaganda that only knuckleheads fall for.” What is a soldier? Somebody who is trained to follow orders and the more unknown the enemy, the better. These agents are only told what is needed for them to do what they are supposed to. When they speak, or mention any of us, there are several ideas floating around their heads, which have been repeated so much that we pick up on why they act above the Law: they don’t realize the injustice they are committing.

In Cuba, politics is above laws and the Constitution. According to these agents, these so-called “interviews”, which are no more than a reservoir for coercion, threats and abuse. What they see in front of them are mercenaries on the US government’s payroll, worms, counter-revolutionaries. So, the metaphor of putting a filter over what soldiers see in Black Mirror makes sense when you come to terms with the fact that they need a good brainwashing so that an army of men can be maintained, at the government’s beck and call, or to go into battle.

The agents interrogating Javier, Alberto Fonseca and Angel Rodriguez (if these are their real names) are robots. Unable to assess the situation for themselves outside of the code they have been trained in. However, truth is like water, transparent, clear and it filters into every space, no matter how much you try to stop it.

There were certain things they said that gave away the true feelings of these agents, that proved they were leaving the totalitarian matrix, “the great minority” who didn’t agree with the new Constitution.

If it is great, another phrase makes no sense: “take to the Sierra with a rifle”, which is to say, “change won’t come via a peaceful struggle, arms will be needed. Or when the agent also said: “within a few years, when this changes, the Institution of Independent Arts will be created”.  This last statement reveals an absence of ideology, at least in Fonseca’s case, who dominated the interrogation.

Anyhow, it was truly sad for me to confirm that these people are authorized to go above the Law, when they are in fact its representatives. The consequences of this kind of distortion will continue to come to light, as relationships become more complex in a country that is becoming increasingly diverse.

As a great Cuban intellectual once said: “It’s a small step to becoming a henchman”, referring to the fact that we are still alive. And this is the fine line that sustains the Cuban Revolution’s discourse. Physical death is easy to report, but the everyday torment and psychological abuse, as well as the future death of a new kind of hero: “The emigre”, is what awaits critics as their final destination.

11 thoughts on “The Humanity of a Cuban State Security Agent”