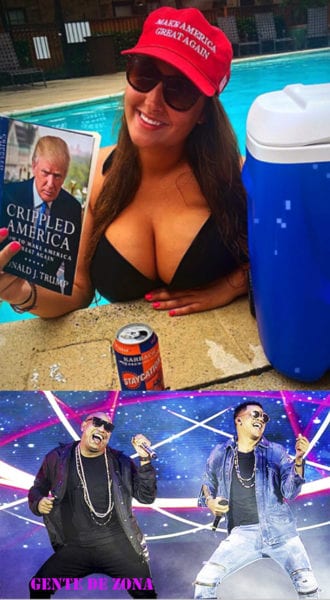 HAVANA TIMES – Why do sensitive and astute people in the US hate Donald Trump? Well, because Trump represents what is known as the “ugly American”.

A money-grabber, who flaunts his cash, is vulgar, superficial, narcissistic, nationalistic, the kind of human who thinks they are always right and that their country is the center of the world. Trump is not alone in power, of course. There is a group of advisors in the White House who are accompanying him on this sensationalist trip that is his presidency.

He has the media under control, there was a reason he “warned his people, telling them not to believe the press.” Cubans living under a totalitarian regime for 60 years know full well what this message implies, Trump is covering up his hidden desire that the US people only believe him and nobody else. He knows that most media outlets are biased and answer to their donors or sponsors. With this reality in mind, he waters the seed of doubt so he can dress up his unpopular measures and continue onwards to totally dominating the US people.

Due to the political landscape with superpowers China and Russia, I believe that people in the White House are trying to extend Donald Trump’s presidency as long as possible. It seems that they are suspicious of the Xi Jinping and Putin systems of government. If you want to defeat your enemy, sing his song. If I remember correctly, this phrase comes from Asian wisdom. Trump has become the perfect candidate.

His political slogan: Make America Great Again, is the tacit example of his totalitarian ambitions.  And, he is appropriating the wish of the masses. That’s what his politics is based on.

“The Threepenny Opera”, by Bertold Brecht, analyzes how imperialism isn’t generous even with its own people. During my first trip to the US, I remember the shock I had when I saw many people aged 60 and over working in the airport. All those hours standing up, flight delays which extend their working day, were some of the things I started wondering about. Maybe I had time to think about these small details, which I say an awful lot, because I missed my flight for Los Angeles and I spent the night in the airport.

The best way to describe what an “ugly Cuban” is, is to talk about music. Rappers Maykel Osorbo and Pupito are serving unfair sentences because they stood up against Decree-Law 349. This law wants to transform independent art into a crime. Rap songs are almost always anti-establishment, critical, and they survive in the fringes of society as a result. As Maykel and Pupito had trascended the critique of their songs and shouted out: “Down with Decree-Law 349”, during a concert in an alternative space (but still belonging to the government), the Cuban government intervened and arbitrarily sentenced them to prison.

However, most reggaeton singers are the greatest exponents of vulgar behavior, cynicism, tackiness, promoting a society of consumption, and they are irresponsible when faced with the repression their colleagues and most Cubans suffer.

I haven’t seen any of them demand the freedom of Maykel or Pupito. As they don’t criticize those in power, they are the new model of success within Cuban society. Frivolity and disregard are highlighted in their music videos. Brandishing the flag of sexism and machismo, both of which are personality traits of this kind of ugly. Excess, poor taste and double standards make them jump out of the crowd.

The warning in this case is about where Cuban society is heading, bearing in mind the fact that they also represent the population’s new hidden desires, within a society that is beginning to leave totalitarianism behind, and according to what comes from the world’s great superpowers, is it playing into another one that leaves human development out of the equation?

20 thoughts on “The Ugly American vs. the Ugly Cuban”