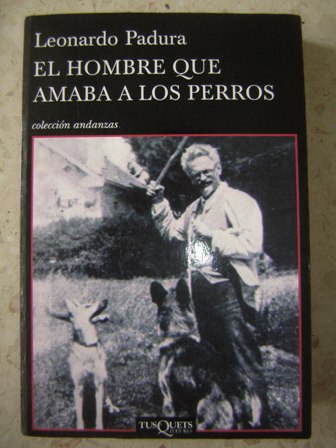 HAVANA TIMES, March 26 — For a long time I didn’t thinking about death as a solution – and I’m not talking about just physical death, but the death of everything, even dreams. I didn’t think about any of that until I finished reading The Man Who Loved Dogs.

Me — someone who has hidden themself away in my ivory tower against a fear of writing or going into the street or loving — when I finished reading that book by Leonardo Padura (about which several people have written about in Havana Times),  I could only cry.

I wasn’t crying for the character Trotsky, who is ultimately just a symbol of the onerous reality of Cuba and of Stalinist excesses (what other stories are we going to write about here?). Rather, I was morning the end of everything, the confinement, the damned circumstance of water being all around us, the reflections of Padura, and the reminder that pessimism never leaves us.

I strive to say that I’m a fortunate woman, though maybe I’m not. No one asks me, and the regular commenters on this website (some of them, but not all) can be very cynical in their comments, though they haven’t the remotest idea of what it means to be a victim of geographic fatalism, utopia or the dreams and greed of others with more power.

At least for me, life is going to be screwed up for a some days. And if you’re depressed and you’re Cuban and you still live on the island and you don’t have a safe escape route, I don’t recommend you read The Man Who Loved Dogs.

Reading Padura, one of the authors most widely read and sold on the island, I’ve always found an adventure, a kind of creative conciliation. But this time is was more anxiety than pleasure that compelled me to finish the last pages of that large volume full of history and tragedy.

We come to love the characters that the writer constructs, and eventually, at least me, I didn’t take sides. I didn’t believe in the innocence and absolute evil in any of the faces that the writer presents us.

While reading I couldn’t stop thinking of Julio Antonio Mella, the young Cuban communist who in 1925 founded the first Communist Party of Cuba but was later expelled from its ranks for being…a revisionist? …a Trotskyite?

His exile to Mexico coincided with the epoch and convictions of Diego Rivera and Frida Kahlo. It was there that he found romance with another old communist, Tina Modotti, who was also a friend of the painters (though none of that is even mentioned in Padura’s fiction).

As the story goes, the death warrant issued on Mella came from Cuban dictator Geraldo Machado back in Havana, though Mella was expecting the long and powerful hand of Stalin.

Padura reminds me that I have, through Mella, a debt to this nation, to its history and its depths.

From Trotsky (the character in the book) I learned that it’s important to sustain one’s work. On more than one occasion I’ve gotten up energetically to write or think about the half completed writings I have on my desk, but always with the weight of my consciousness of being more attentive to the works of others than to my own.

From Mercader [Trotsky’s murderer], I gained the certainty that we can all become instruments, victims and victimizers. I learned that it’s not enough to be attentive; one must assume an intelligent, critical and conscious approach to life.

It’s not enough to close this store and open a new one where we are better people and the system is more…utopian?

There are things that once broken, they can’t be put back together. For example virgins never recover their hymen; and you can’t return to being innocent once you tell on your neighbor (a person who has been betrayed will rarely trust again blindly).

But Ivan, the least important of all the characters, perhaps because he looks like all of us here, reminds me that I still haven’t made a wish or dropped a few coins into that famous Trevi Fountain in Rome.

One thought on “A Book Not to Read”