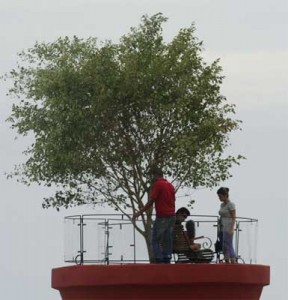 HAVANA TIMES — If people in Havana were aware that a piece of paradise (free and beautiful), suspended six feet above the ground — was right here, close by, before your eyes, along the Malecon seawall itself — the lines would be hellish.

I discovered it (during the Havana Biennial) and went up to it. I sat there and for five seconds and enjoyed “Paisaje itinerante” (Shifting Landscape,) which is the name of the installation by artist Rafael Villares.

Uncomplicated, it’s a simple idea. It’s an enormous pot with a ficus tree planted in the center, lending shade to a park bench.

Just the thought of it gives me pleasure.

I didn’t make the slightest effort to avoid the ideas generated in me by this piece of visual art, so I decided to write about it.

I think it pertains to our conception of an oasis as a metaphor. It’s the realization of impossible dreams…an invitation to meditate about what is Cuban, though the image is universal. 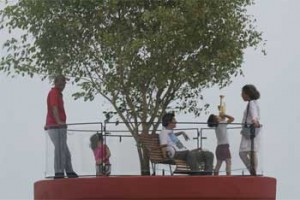 The work is part of the utopia we all share. It’s the piece of land that we can take wherever we go. It’s a subversive idea that drives us to rise above the ugly…above human misery.

Though the pot was hanging six feet above the ground, with a chain on it that binds us and anchors us to earth, reminding us that anything is possible, without losing touch with reality.

But a Bay Leaf tree? Why a Bay Leaf? Maybe because of the connections it has with the concept of what it means to be Cuban, since one of the branches encircles the shield on the national emblem.

In addition it’s a tree with shallow roots, though it grows to be large in size, which leads me to think of the exodus of Cubans, of the youthfulness of the concept of the Cuban nationality, which many people are determined to restrict and close as a finished idea, which has no right to change, to evolve. 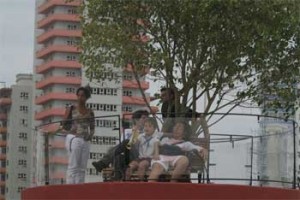 Although, I confess, for me such restfulness is also a dangerous metaphor because it could make me throw my hands up to everything, causing me to cease struggling for the things I want. And that would make it even more subversive.

“Paisaje itinerante” will be in several places in the city. It was at the Cabaña fortress and then the Malecon. Later it will be on the Paseo esplanade and then at the La Puntilla mall, which is located at the very end of the Malecon seawall.

In any case, if you get excited enjoying paradise, I’m sure that the installation by Rafael Villares has a lyricism that adds to a sunny afternoon.